Eiscue (コオリッポ, Koorippo) is an ice-type introduced in Generation VIII.

It is essentially just a penguin with an ice cube for a head. On the ice cube, it has moving eyes and beak in the shape of a penguin's eyes and beak. The ice cube also holds one strand of hair on top. On the penguin's body, there are light blue markings on the side of the somewhat chubby white belly, with two arrows on each side.

In Noice Face, its ice cube has shattered, revealing its small, blue, and oval head that has a worried expression.

Eiscue swims in cold water to keep its head covered in ice. It catches prey by dangling its hair like a fishing hook. Whenever Eiscue has something on its mind, the air around its hair starts to freeze.

Eiscue is based on a penguin with a block of ice on its head. It may also be based on the Great Auk, an extinct, flightless bird species that lived in and around the British Isles. They swam with their heads floating above water, similarly to Eiscue. In the winter, their heads gained white feathers, resembling snow or growing ice.

In Noice Face, Eiscue is just a simple penguin with a round blue head.

Eiscue comes from a corruption of ice cube and Eis (German for ice).

"Noice" from "Noice Face", being a corruption of "no ice" in this context, is also an exaggerated way of saying "Nice". 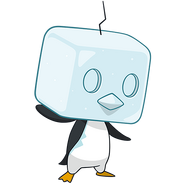 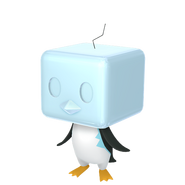 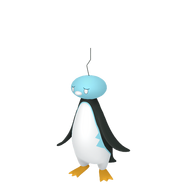 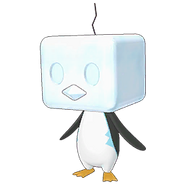 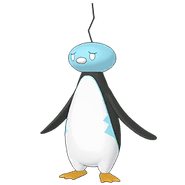