Eelektross is long eel-like Pokémon. It is top half is navy blue, while its underbelly is cream colored. It has a large open red-rimmed mouth with sharp fangs encircling it. It has red eyes with black pupils and yellow markings surrounding its eyes and tapering into two yellow specks on its side. It has long tentacle-like arms with three claws on each, and a circular red and yellow pattern on the underside of its tentacles. It has a long navy blue fin with a cream colored frill atop its head that extends down its back; another cream-colored fin extends from its lower back, and it has two small ovular fins that serve as its feet, which it walks upon.

They serve as apex predators, both in and out of the water. Eelektross use their sucker-like mouths to draw in smaller prey and swallow them whole. To subdue larger victims, they latch onto them with their teeth and let loose powerful electric shocks. Capable of both levitating and waddling on land with their flippers, Eelektross will ambush unsuspecting prey on the shore. They will grab victims with their arms before sinking in their fangs, electrocuting them, and dragging them into the sea.

These Pokémon are territorial, claiming large swathes of shoreline as their own. They engage in displays of dominance using the crest-like fins on their heads to assert themselves. Notably, both male and female Eelektross engage in this behavior, unlike in most species where only the males do so.

Eelektross can paralyze their victims with their teeth that unleash electric shocks that destroy said victims' nerves.

Eelektross evolves from Eelektrik when a Thunderstone is used. Eelektross is the final form of Tynamo.

An Eelektross was seen in the Anime belonging to Subway Boss Emmet. It was first used in Battle for the Underground!, to power an old railroad car with Discharge. It is once again used in Lost at the Stamp Rally! to battle alongside Ingo's Chandelure with Cilan's Pansage and Ash's Tepig. Being far more skilled trainers, the Subway Bosses won the battle with Eelektross and Chandelure, as their Pokémon were fully-evolved and more powerful.

Eelektross also appears under the ownership of Kendrick, a trainer participating in the Unova League. It battled Cameron's Ferrothorn in Curtain Up, Unova League!, where it did major damage with two Crush Claws, but was defeated when Ferrothorn intercepted its Crunch with Pin Missile.

Like in the games, Ghetsis owns an Eelektross, which he used twice. The first time, he uses it to paralyze Black and steal the Dark Stone. Eelektross is called up again when Ghetsis battles Black in a 6-on-6 match. It beats both his Carracosta and Braviary with his Electric type, but is defeated by the sheer power of Emboar's Flare Blitz.

Eelektross comes from eel, electric, and boss or gross. 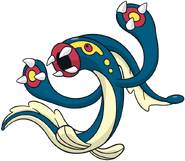 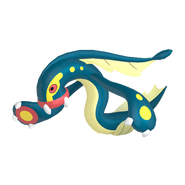 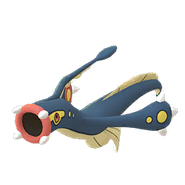