Eelektrik is a small blue and tan Pokémon, with a tan fin on the top and bottom of its head. It has a round mouth full of razor sharp teeth, surrounded with red lips. It has yellow decoration around the eye and three yellow dots on its body. This Pokémon does not have any gender differences, and it lives in cave-like areas.

Eelektrik has only one ability, that being Levitate. Levitate causes Ground-type moves to become useless in battle. Outside of battle, this ability is useless itself.

Eelektrik and its evolutionary forms resemble electric eels, lampreys, jawless fish, and leeches. According to an interview, Eelektrik was also based on an eel that Yusuke Ohmura, the designer of the Tynamo-line, caught at the games development time.

Eelectrik's name is a combination of the words "eel" and "electric". 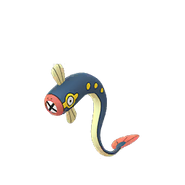