Edmund Paul Lewis (more commonly known as Ed Paul) is an American voice actor and scriptwriter, who was one of the original voice actors in the Pokémon anime franchise. His nickname is Ted, which contributes to his other, better known handle of Ted Lewis, which he used to credit his voice work in Season 1 (among other productions) and his staff work in anime. He was the original voice of James, playing the character for seven episodes before passing the torch to Eric Stuart. He would later play many episodic characters, a few minor characters such as Flint and Eusine (though later passed onto Eric Stuart and Dan Green, respectively) and major recurring roles such as Giovanni and Tracey Sketchit. Additionally, he is the go-to battle announcer voice, appearing in every major Pokémon League and competition during the 4Kids era as well as the Pokémon Stadium titles released for the Nintendo 64 game system.

While Ed has played at least one new role following TPCi's acquisition of the anime license, he could not initially reprise his previous characters. Later in Season 11, however, he was successfully able to take the role of Giovanni back from Craig Blair, his replacement (and presumably Tracey in the event he were to show up again), making him the first 4Kids actor to reprise a role that was previously theirs.

Lewis had also worked on the episode production staff during the 4Kids years, providing additional voice direction with Eric Stuart during Season 5 and adapting the script of various episodes of Pokémon Chronicles.

Other work Ted has been noted for is Bakura in the original Yu-Gi-Oh!, Zangulus in Slayers, King Dedede and Escargoon in Kirby: Right Back At Ya! and recently Jack Atlas in Yu-Gi-Oh! 5D's and Arc-V. 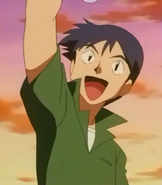 Whirl Cup winner
Add a photo to this gallery
Retrieved from "https://pokemon.fandom.com/wiki/Ed_Paul?oldid=1201265"
Community content is available under CC-BY-SA unless otherwise noted.