Dusknoir is a Ghost Pokémon with a semi-humanoid appearance. It has a light gray head with a single red eye, crown like protrusions around its neck and a yellow antenna on top of its head. Its body is covered with gold bands: two bands on each of its arms and one band wrapped around its head. It's stomach has a gold band in a zigzag pattern and two eye-like patterns, forming a face. 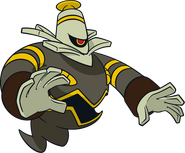 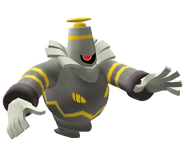 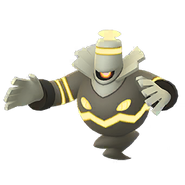