Duraludon (ジュラルドン, Jurarudon) is a Steel/Dragon-type Pokémon introduced in Generation VIII. Its counterpart is Tyranitar. While it is not known to evolve into or from any other Pokémon, it has a Gigantamax form.

Duraludon is a bipedal reptilian Pokémon resembling a lighter. Its body is light gray with tints of black markings on its palms and pubic area. It has a red "button" like appendage on its head and its connected to its upper jaw by a hinge. Its eyes are yellow and rectangular, almost robotic to an extent. Its tail has a vent, while it has 2 feet with just 1 toe.

Its Gigantamax form somewhat resembles a hybrid of its regular form and a skyscraper, Its "button" became an antenna, and windows line its body.

They live on mountains with Tyranitar and the two are often seen battling each other for control of mountain territory. A famous Galarian movie depicts a fight between a Dynamax Tyranitar and a Dynamax (Gigantamax in the sequel) Duraludon taking place in an urban setting.

Duraludon use their two asymmetric hands to grind stone into rubble before consuming it. They must consume a variety of minerals in order to strengthen their bodies.

Duraludon's body has the texture of polished metal which is both lightweight and strong, but rusts easily. This makes Duraludon more agile but forces it to always hide from the rain like Sudowoodo.

Its Gigantmax form can glow on some parts of its body, but is very sturdy and can withstand naturally-occurred earthquakes.

Duraludon may be based on a theropod dinosaur. Its rivalry with Tyranitar mirrors the rivalry of Mechagodzilla and Godzilla, respectively. It physically resembles a lighter. Its mechanical nature, projectile combat capabilities, and theropod-like appearance may also reference Metal Gear REX or the Transformers character Grimlock. It has the properties of Duralumin, an aluminum alloy that is strong and lightweight, but also vulnerable to corrosion. It's design is similar to MOGUERA, a mecha that fought alongside Godzilla in the 1994 film, Godzilla vs. SpaceGodzilla.

Its Gigantamax form resembles a skyscraper, specifically The Shard, the tallest building in the United Kingdom.

"Duraludon" comes from "duralumin", "durable", "aluminum", "dragon", and "-don", a suffix usually used in dinosaur names. Its name may also derive from "Jurassic", one of the three periods of the Mesozoic era, which was known as the age of the dinosaurs. 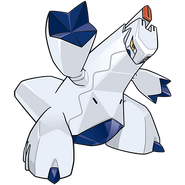 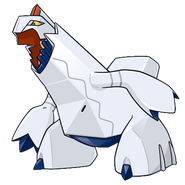 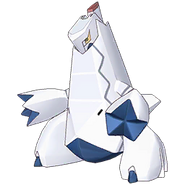 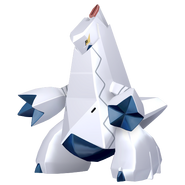 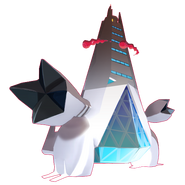 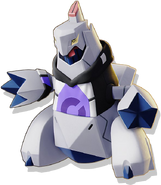