Duosion is a rounded cell-like Pokémon. Like its pre-evolution Solosis, its inner body is pale green in color with a darker green, jelly-like membrane surrounding it. Its outer membrane is thick and has two rounded bubble-like protrusions on either side of its bottom half. An unattached pale green segment floats above its head. It now has what appears to be a developing torso, and two stubby arms. It has a face that is identical to its pre-evolution, but its head now has a seam running through the middle. It apparently has two divided brains.

Duosion are still technically a single cell, but because of their arrested development, they sometimes seem to act as two separate beings. This is because they quite literally have two separate “brains”, which are really the spiral-shaped organelles they had as Solosis, which have migrated into their heads from outside prior to mitosis. The two structures often act independently from one another, forcing Duosion to attempt to execute both actions simultaneously. This usually renders their movements jerky and erratic.

Occasionally, both of their brain-like organelles will have the same thought, often due to experiencing a shared threat or initiating an innate reflex. The psychic powers of Duosion are strongest when this occurs--able to reach over half a mile (0.8 kilometers) away--as both organelles are able to act in unison rather than independently in order to focus their abilities.

Duosion is based on a eukaryotic cell with its green surroundings being cytoplasm (which works similarly with Duosion to how it works in real cells) and its body being a nucleus. The line on its head may be based on a brain, alluding to its psychic typing. The line may also resemble a cleavage furrow, a line that forms in a cell once it splits during mitosis. Due to the embryo-like theme with its evolutionary line, it may be based on the fetus stage of an embryo in which it begins to grow appendages such as arms (which is something Duosion has after evolving from Solosis).

Duosion comes from duo and fusion or division (referring to mitosis, where cells divide). 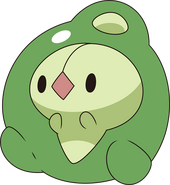 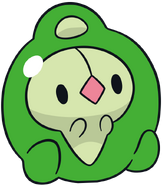 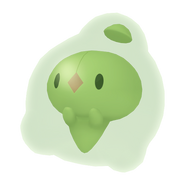 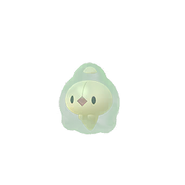