Ducklett is an aquatic bird-like Pokémon that resembles a duck or swan chick. Its body is aqua/light blue in color and the fluffy structure that surrounds its plump breast is sky blue. On its head is a heart-shaped, feather-like protrusion. Its bill and feet are yellow.

Ducklett inhabit slightly acidic ponds, though they can also sometimes be found splashing around in large puddles. Their favorite food is peat moss, which is abundant in their habitats. Ducklett never leave their mothers’ sides, walking behind them in single-file lines with their siblings. Ducklett are excellent divers. They will spend long periods of time completely submerged as they search for food. Ducklett are poor fliers, however, so they rarely take to the air, even when endangered.

If attacked in the water, Ducklett will splash about wildly to distract opponents as they escape. The splashing also alerts their mothers and siblings of approaching danger. Ducklett store water in flexible sacs within their bodies; on land, they can then spray this stored water from specialized feathers on their wings at the eyes of foes, briefly obscuring their vision as they frantically waddle away. Their distressed quacking will signal to their siblings to aid them in spraying more water as well, potentially blinding threats from all possible angles.

Ducklett evolves into Swanna at level 35.

A thief has a Ducklett which he uses to steal things.

Ducklett is based on a cygnet (a swan chick). Due to its evolution's resemblance to a swan, Ducklett's appearance is probably based on the Tale of the Ugly Duckling where an unattractive duckling grows into a beautiful swan. The feathers around its breast resemble a swim ring, often used by young children who can't swim very well.

Its Japanese name, Koaruhī, is a portmanteau of 子 (ko, child) and an anagram of 家鴨 (ahiru, duck). 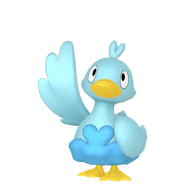 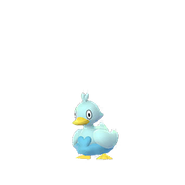