Dubwool is a large, quadruped, sheep-like Pokémon. Its somewhat fat main body is fluffy and white with black spots. Around its neck is gray wool with 4 long tufts. Its head is black with a white blaze on its head and its eyes are yellow with slit pupils. It has long black horns and no visible ears. Its legs are black with split hooves.

Despite having horns, Dubwool doesn't use them in battle, but rather to attract mates.

Dubwool's wool is very springy, so springy that that a carpet made using its wool is closer to a trampoline.

It evolves from Wooloo at level 24.

It is based on a Jacob sheep; a British breed with a piebald coloration and multiple horns. The black patterns on its round body may also be a reference to a soccer ball.

Dubwool may be a combination of double and wool. 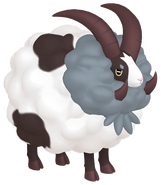 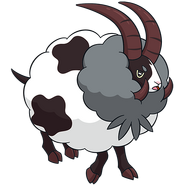 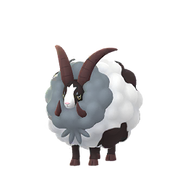