Drizzile (ジメレオン, Jimereon) is a water-type introduced in Generation VIII. It is the evolution of Sobble.

Drizzile is a slim, blue bipedal lizard. Its head is round, and its nostrils are small and right above its mouth. Its green eyelids are half-closed over its small pupils, and two dark blue dots touch the outer edge of each eye. There is a thin black line from eye to eye. It has three protrusions on top of its head, two of which are blue with the shorter one sticking up, and the third protrusion is purple. Its belly is covered by a white teardrop shape, with a dark blue line lining the top. Its hands resemble mittens and are green. Its feet have only two toes each, which are all green, similar to its hands. Drizzile has a chameleon-like tail, with a dark blue dot at the end.

Drizzile are clever and intelligent fighters, yet also very lazy. In combat, Drizzile use water moisture from their palms to create water balloons. To keep enemies out of its territory, Drizzile lay traps around the area using these balloons due to their cautious nature. In fact, they may fill ditches with water and then overlay them with leaves and mud to make them appear solid; enemies trying to approach will try to walk over the ditches only to fall inside.

When hunting, nonetheless, they can turn from slothful to concentrated. Drizzile prefer to do as little work as possible in order to achieve the results they want, and are known to fool other Pokémon into doing tasks for them. They tend to be asocial and prefer to spend their time in the solitude of tree hollows and rock depressions.

Seen by Goh's Drizzile, despite their solitary and lazy nature they do like to be active when no one else is around or at night. Similar to a Greninja, Lickitung or Kecleon, they too can also use their tongues grab and restrain opponents.

Drizzile can extend and shoot their normally curled but slimy tongues to capture their prey. They can also become invisible through using the moisture and water around them.

Drizzile is based on the veiled chameleon due to its color scheme being similar to that of the males. and it's hairstyle also references an emo. It's lazy behavior is reference to early stages of an adolescent.

Drizzile comes from the words, "drizzle" and "reptile", or "missile" as it shoots water balloons.

Its Japanese name, Jimereon, comes from jimejime (woebegone) and "chameleon". 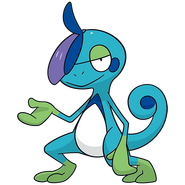 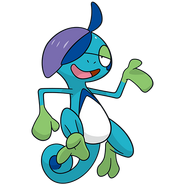 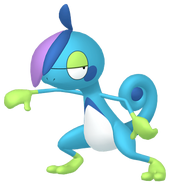