Drilbur is a chubby mole-like Pokémon. It has a plump black body with blue streaks along with a white snout and white claws. It has blue round spot on its palms. Drilbur has wide eyes that are almost completely white but contain a single black dot-like pupil. It has oval shaped feet that have three toes. It has three sharp white claws on each arm. Its claws are almost connected, but the three lines show three claws.

Drilbur can be found in areas with temperate climates and solid, dry ground. They spend most of their time in underground caves and tunnels, primarily surfacing to supplement their diets with fruits and plant matter (they usually consume insects and other small invertebrates found in the dirt). Despite being mostly solitary, Drilbur tend to be very friendly towards other Pokémon and humans. They sometimes develop mutualistic relationships with people in suburban and rural areas, plowing backyard gardens and orchards in exchange for fruits and Berries. However, unruly Drilbur can easily damage entire fields of crops by tearing carelessly through plant roots, so trained individuals are heavily preferred for agricultural purposes.Drilbur build their nests underground, constructing many tunnels passing through them for travel and ventilation. They leaves distinctive mounds of dirt on the surface directly above their nests to help them find their way back home.

Drilbur burrow by clasping their claws together over their heads and rotating about at high speeds like drills. They can spin as fast as 30 mph (50 km/h) in this manner, nearly as speedy as an average car on a city road.

Drilbur evolves into Excadrill at level 31.

Trainers with a Drilbur

Drilbur is based on a mole.

Drilbur comes from drill and burrow or bury.

Its Japanese name, Moguryū, is likely a portmanteau of 土竜 (mogura, mole) and screw (referring to its drill-like behavior). 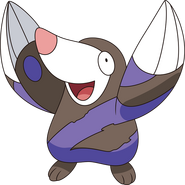 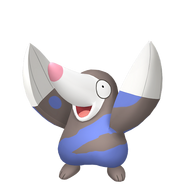 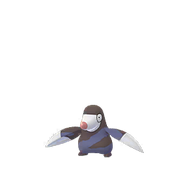