Dreepy is a green Pokémon that resembles Anorith. It has a green head with two yellow eyes and a darker colored upper jaw. Six spikes extend from its head. Its body is a green ghost tail with two simple arms and three spikes near the end of its tail.

Dreepy are very fond of their former homes, often wandering their past homes after being reborn. It possesses next to none battle skills, but gets stronger by training with its friends.

Its final evolution, Dragapult, uses Dreepy as missiles, which gets Dreepy very excited when they are going to be shot out.

Dreepy evolves into Drakloak at level 50, and will later evolve into Dragapult at level 60.

Dreepy may be based on a Diplocaulus (an extinct genus of amphibians) and a dart, arrow, or missile. Its Dragon typing may come from the Olm, a salamander species in central Europe who was mistaken for a dragon baby.

Dreepy comes from the words "dragon" and "creepy". It may also include "dreary". 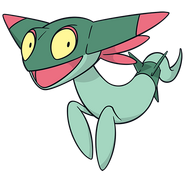 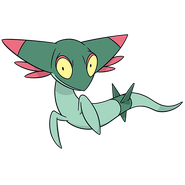 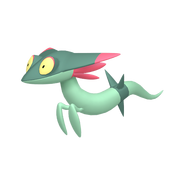