Drednaw is a large Pokémon resembling an alligator snapping turtle. Its carapace (upper shell) is brown and is divided into three segments, and has a yellow section around it. Its plastron (lower shell) and its lower jaw is flat and are pale yellow. Its head has a yellow horn on it and has two large sections coming off of it. Its eyes are white and somewhat rectangle shaped with small pupils. Connecting its head to its lower jaw are two yellow circles. Its front legs have one large yellow protrusion each, and each of its feet have three white toes. Its tail is long and has two spikes coming off of it.

Gigantamax Drednaw is now bipedal and its horn resembles a tank. Its tail is now longer and has more spikes, and now has three yellow spikes coming off each leg. Its plastron has three protrusions, with the middle being the longest. Its head is hidden inside of its body, and its eyes glow red. Like all Gigantamax Pokémon, Drednaw has red clouds as they spin in and out of its shell.

Drednaw are very aggressive and tend to bite. Because of this, inexperienced Trainers will not know how to properly train them, so they end up releasing them.

The power of Gigantamaxing has allowed it to stand on its hind legs and become bipedal! From its standing position, it can come crashing down on opposing Pokémon and crush them with its massive body! Drednaw normally keeps its neck retracted within its shell, but when it attacks, it can rapidly shoot its neck out. Its jaws are also incredibly strong, capable of easily biting through huge metal towers. The strength of its jaws combined with the force of its neck gives Drednaw the power to punch a hole through a rocky mountain in a single strike.

Drednaw's bites are very powerful and can even break rock and iron. Although its shell is very heavy, it can move quickly due to its well-developed muscles.

A Drednaw appeared in "Flash of the Titans!", where Team Rocket encounters it and attempted to catch it, only for it to end up being Gignatmax where it got exposed by the Dynamax energy. It was later been defeated and return to normal in "The Climb to Be the Very Best!", where Ash's Pikachu had been Gigantamax as well during the crisis.

Drednaw is based on an alligator snapping turtle. It also shares similarities to a battleship. 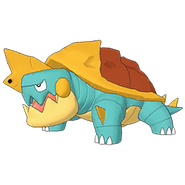 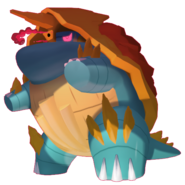