For the variant appearing in the games, see Drayden.

The Mystery of the Missing Fossil

Drayden is a character appearing in Pokémon Adventures, who was the Gym Leader of Opelucid City in the Unova region.

Drayden is a slightly old, but a tall and muscular, respected figure. Drayden has white hair and a beard, which, notably enough, covers his mouth. Drayden wears a white shirt with rolled sleeves. He also wears gray pants, which are attached by two purple suspenders (with two shoulder pads with spikes), as well as some black shoes. In addition, Drayden wears some black gloves and a green gem etched onto the collar of his shirt, with two green strings.

Iris was training near Blackthorn City in Johto with Dragon-type Pokémon. Since she could not reach her potential, Drayden and his assistant came to her from Unova to help her out, but noticed she was lacking manners. Iris refused to be mentored, and sent Lapras to attack his Druddigon, but was defeated. The dragon clan elder, whose translator spoke in his stead, hoped that Iris would do well by becoming Drayden's successor of his Gym in Opelucid City. Iris became annoyed, for she wanted to become the Champion. Drayden dragged her to Unova, taking her to see Alder, who was wrestling his Bouffalant. Alder assumed Iris wanted to battle him, to which she denied, as she didn't know why Drayden even brought her to him. Drayden shushed her, since she lacked manners. Iris asked how would she even call them, to which Alder and Drayden stated she could call them "gramps". Iris thought it was confusing to call two people with the same nickname, so they corrected it. Iris felt the negativity inside her being released, as she saw these two people started to respect her as an equal.[1]

Black researched that Drayden was a Gym Leader that he'd have to defeat on his way, to participate in the Pokémon League.[4]

Drayden contacted Brycen, who was at Nacrene City's museum, and reported what happened. Brycen opened a hatch, revealing the Light Stone. Drayden commented to restore the balance, they had to awaken the other dragon, Reshiram. Brycen noticed the Light Stone rolling independently towards Black, and told Drayden he was passing the mission to him. With everything over, Brycen mused that Black had to grow stronger, as he picked him and the stone up and took them away.[5] At the Tubeline Bridge, Brycen met up with Drayden. The latter praised Brycen for his plan, who pulled out the Light Stone he had found at the museum. He stated while Black was capable of training himself, he wondered if he could unseal Reshiram out of the Light Stone. He also wondered if it was a good idea to even unseal Reshiram, thinking they'd be the same as Team Plasma, who have done the same with Zekrom. Drayden reminded Team Plasma was more powerful than they were, and had to carry out the plan. The two men glared at each other, but Iris arrived and calmed the tensions down. Drayden introduced Iris to Brycen, who ignored them, as he went away to find Team Plasma's castle.[2]

When Black passed his first challenge, he encountered Drayden and Iris. While Black referred Drayden as Opelucid City's Gym Leader, Iris was annoyed that he didn't mention her, aside that she was the "little girl from Castelia City." Drayden explained Iris was her apprentice, and helped him in studying the Legendary Dragons. Black belittled Iris that she didn't help Drayden much, to which she wanted to prove her strength by facing Drayden. However, Drayden's Druddigon easily defeated her Fraxure, but Iris' confidence was undamaged. Drayden praised his Druddigon, to which Black and Bo noted Drayden was really strong, and they'd have to challenge him someday. Before Black went to take the next challenge, Drayden placed his hands on Black's shoulders, reminding he had to be the Truth that would fight the Ideals. Black was a bit nervous, while Drayden walked away.[3]

Drayden's secretary came to him with an urgent press conference request. Drayden thanked her, while she wondered if they should clarify what it would be about. Drayden refused, for he intended to make the press conference to bait Team Plasma to hear the information out.[6] Drayden called upon a conference in Opelucid City. As his Druddigon shushed the audience, Drayden reminded people of the Pokémon League, which was compromised due to a number of incidents. Having spoken with the Pokémon Association, Drayden announced that instead of the tournament being held three months later, it would actually be held in one week.[7] The audience was in shock at Drayden's annoucement, and believed this was because of the recent disappearances of the Gym Leaders, whose Gyms were closed off. Drayden simply laughed, and while he confirmed that the Gym Leaders were nowhere to be seen, he explained that he and the Pokémon Association were searching for them.

Still, he reminded they could only change the date, but not the rules, so only trainers with eight badges could enter. He walked away, as the audience was trying to ask him more questions. Drayden's assistant remarked it was as Drayden had predicted that the audience would be upset. Drayden muttered it was the only solution they had in mind, knowing that Team Plasma would definitively try to enter the League and do something. To assure himself that Team Plasma had awakened Zekrom, he had had the dates changed. He asked where Iris was, to which the assistant stated she was with the guy of "Truth". Drayden believed they were in Icirrus City, and mused to himself how cold there was.[8] Drayden was making preparations for the opening of the Pokémon League. He announced on TV news that 31 challengers would enter the Pokémon League, and wished them luck. As he was discussing with his assistant, Black swooped in, to which Drayden asked what did he even want. Black reminded that this day was only the opening of the Pokémon League, but the tournament itself hadn't started yet. Since the deadline was basically one day away, Drayden started Black was just splitting hairs. Black confirmed that, and shouted out of Drayden to challenge him for the Gym Badge right away, to which Drayden glared at him annoyingly.[9]

Drayden sent Druddigon to battle Black's Brav. His assistant reminded he had 15 minutes left before the opening ceremony, and Drayden pointed out this was how much time he had for their 1-on-1 battle they had in the hallway. Drayden noted Black acted tough at the start of the battle, yet he couldn't even land a hit agains this Druddigon. He became angry, seeing that Black was hesitating, causing his orders to be slow and costing him the match. Black admitted he had a lot of problems currently, due to Musha abandoning him, and wondered if his Brav felt the same way. Drayden closed his eyes, believing Black was concerned that he proclaimed him as Unova's Truth. Black was uncertain, for he only believed in one truth so far: his wish to win at the Pokémon League. Drayden confirmed his question that he was half-hearted, and had Druddigon finish Brav off. Drayden pointed out he didn't even need the setting, fitting for his Druddigon, to battle Black.

The latter knelt down, realizing that Drayden was too strong, and he was at least satisfied by at least reaching so far. Suddenly, the door opened, causing the blizzard to freeze Druddigon for a bit. This was because Caitlin arrived with Gothitelle, and had the latter touch Black's head, allowing him to contact the Gym Leaders, who reminded him that he actually cared and listened to his Pokémon, as he showed them during their Gym Battles. Black regained his confidence, and had Brav use Air Slash. Druddigon evaded, to which Drayden stated such an attack was slow. However, Brav simply knocked the door open, letting the blizzard in to freeze Druddigon, whom Brav slammed away, defeating it. For his victory, Drayden grabbed Black and showed on the live broadcast that he was the 32nd challenger: he earned Drayden's badge, qualifying him for the Pokémon League.[10]

Drayden continued the TV broadcast. The Shadow Triad watched these news, and felt that they wanted Team Plasma to take the bait and attack the Pokémon League.[11] He later watched with his assistant the battle between Black and Iris in the semi-finals.[1] As Black and Cheren started their final battle already, Drayden stepped in to tell their battle could continue if both sides complied. Black and Cheren agreed, and their match continued. Drayden noticed that despite Bo having landed more hits on Cheren's Gigalith, the latter continbously used Bulldoze without Black even knowing. As an attack was fired from the audience, Drayden called his secretary, who informed him that Grey, who was actually Zinzolin, had his Cryogonal attack. Since the Hood Man took White away, Drayden stated the final battle would be postponed. Cheren refused, and snatched Black with his Unfezant and took him to the rooftop, where their battle would continue.[12]

As N's Castle emerged from the ground, Drayden evacuated the spectators to safety. He was shocked that an entire castle came out of the ground, and as staircases were emitted, Drayden saved a kid from getting crushed by it. Drayden contacted her, whom she told she was uncertain what happened around them. Suddenly, hordes of Team Plasma grunts appeared, so Drayden had his Pokémon attack them to protect the audience.[13] As they were protecting the spectators, Iris and Drayden were displeased when the audience was cheering for Reshiram and Zekrom, wondering which Legendary Dragon would win.[14] With the battle over, Drayden watched N departing away with Zekrom into the sunset.[15]

Drayden called Cheren, asking him about his job as a teacher. Cheren admitted it was going fine, but wondered where Alder was. Drayden replied Alder "wanted to make room for next generation". Drayden was aware of a third Legendary Dragon of Unova, Kyurem and also told them he passed the role of the Gym Leader onto Iris.[16] 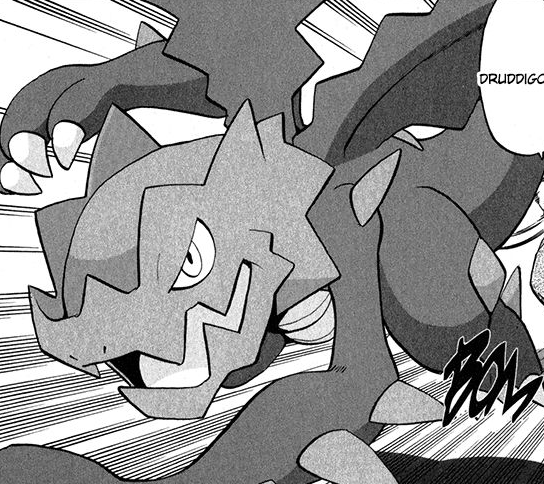 Retrieved from "https://pokemon.fandom.com/wiki/Drayden_(Adventures)?oldid=1275139"
Community content is available under CC-BY-SA unless otherwise noted.