Drayden is a slightly old, but a tall and muscular, respected figure. Drayden has white hair and a beard, which, notably enough, covers his mouth and resembles a toothy lower jaw of a reptile. Drayden wears a white shirt with rolled sleeves. He also wears gray pants, which are attached by two purple suspenders (with two shoulder pads with spikes), as well as some black shoes. In addition, Drayden wears some black gloves and a green gem etched onto the collar of his shirt, with two green strings.

Without saying much, Drayden always appears disgruntled and angry. He's a hard-driven trainer, ambitious and above all else very wise. His bold appearance may suggest that he prefers to be in charge, rather it being a gym leader or training his Pokémon. Drayden displays the strong, experienced nature of an aging work boss.

The name Drayden comes from "dragon" and "den", referring to a dragon's den.

His Japanese name, Shaga, comes from 釈迦 (shaka, Gautama Buddha, as the Dragon type is often connected with mythology and mysticism) or 社会 (shakai, society, as he's the mayor of Opelucid City). It could also come from "shaga", another name for the fringed iris flower.

Drayden in Pokémon the Series (anime) 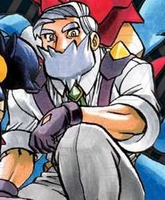 Drayden's sprite in Black and White

Drayden's VS sprite in Black and White

Drayden's sprite in Black 2 and White 2