Dratini (Japanese: ミニリュウ Miniryuu) is a Dragon-type Pokémon introduced in Generation I.

It has a white, circular, gem-like object on its forehead, and its eyes are light purple. It has two developing wings at the sides of its head, which grow to be enormous as it evolves. It has a white belly, and is light blue the rest of the way. Dratini looks like some sort of snake or sea monster. Dratini are born large, and as they shed their skin, they grow larger. They have a massive amount of energy rapidly increasing inside of their bodies, hence, they have great strength, which grows exponentially as they evolve.

Shed Skin -Every turn there is a 1 in 3 chance of removing a burn, paralysis, sleep, poison, or frozen condition.

In the anime, Dratini first appeared in the episode "The Legend of Dratini". This episode is set in the Safari Zone, and sees Ash and the Safari Warden Kaiser protect a Dragonair and Dratini. This episode was banned outside of Japan due to the Warden and Team Rocket threatening several characters with a gun.

It seems to be based on some Sea Snake while its name appears to be known as small dragon.

Dratini is a mix of the words dragon and a misspelling of tiny. 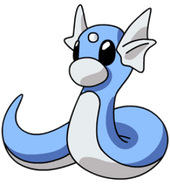 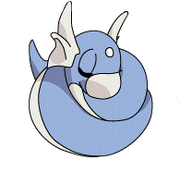 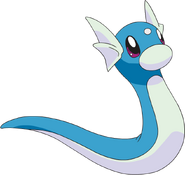 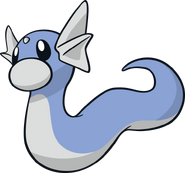 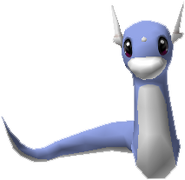