Drampa (ジジーロン, Jijiiron) is a normal/Dragon-type Pokémon introduced in Generation VII. It is exclusive to Pokémon Moon.

Drampa is a serpentine dragon Pokémon with mostly bluish green skin. Its underside and three spots on the side are pale green. Its pupilless eyes are pink with yellow thick eyebrows. It has a short mustache and a white beard on its chin. It also has white hair covering its short tail, arms, and underbelly.

Drampa likes to communicate with humans and other kinds of Pokémon. They treat children gently, and frequently gather at playgrounds and schools.

Although they are mostly kind Pokémon, when they know children they befriended are facing danger, they will become extremely angry. At that time, their Dragon Breath can even reach the power that can blow away a building.

A Drampa, nicknamed Grandpa Forest makes its debut in Tasting the Bitter with the Sweet!

Drampa is apparently based on an Eastern dragon from various Asian cultures, particularly Zhulong from Chinese mythology (a dragon with a man's face which can create daytime by opening its eyes and nighttime by closing them, as well as causing seasonal winds with its breathing). Due to its white beard and hair, and name, it may also be based on elders.

Drampa might be a combination of dragon and grandpa. 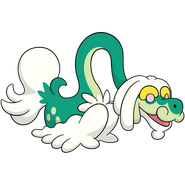