Drakloak resembles a lizard, with a wide, black-colored head with two vertical horns and several red triangle-shaped sports on the sides. It has yellow eyes, while the underside of its mouth is light blue. The rest of its body is also light blue, while its belly is yellow with a red, upside-down V-shaped spot. It has short, stubby arms, triangular legs that have a resemblance to fins, and a long tail.

Drakloak is capable of flying at speeds greater than 120 mph (193.121 kmh). It carries a Dreepy on its head, which it takes care of and fights alongside until the Dreepy manages to evolve. If it lacks a Dreepy to care for, it will become uneasy and desperately try to find any Pokémon to serve as a substitute to take care of.

Drakloak may be based on a Diplocaulus (an extinct genus of amphibians) and different types of fighting airplanes or crossbows. The Dreepy on its head may reference the parental behavior of amphibians, who often let their offspring live on their back. It may also be a reference to the Lockheed D-21, a drone that could be launched from an SR-71 Blackbird or similar plane (which Drakloak's two-finned head resembles).

Drakloak comes from the words "drake" and "cloak". 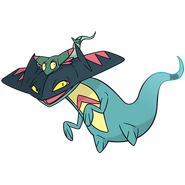 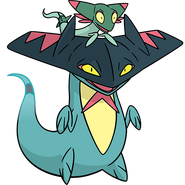 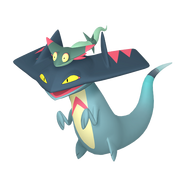