Dragapult resembles a draconic Pokémon with a large triangular head. It has a long light blue tail that becomes transparent at the end of the tail. Dragapult also has four hollow horns on its triangular head where it launches Dreepy from the horns. It also has two small arms and feet each with sharp claws, with the hand claws colored in bright pink. Its body is black and has a yellow underbelly with red arrow-shaped markings.

Dragapult cares for groups of Dreepy. The Dreepy live with Dragapult but they are used as missiles in battle.

It evolves from Drakloak starting at level 60 and is Dreepy's final form.

A Dragapult made its debut during the Darkest Day arc under the ownership of Leon.

It may be based on a Diplocaulus (an extinct genus of amphibians) which is referenced in its ghostly tail design which not only plays off of its Ghost type, but also references how a full tail fossil has never been found of the Diplocaulus. Its body shape also resembles that of a crocodile. It may also be based on different types of military airplanes or crossbows. Its head shape design and the way it launches Dreepy is probably based on a stealth bomber, most likely the Northrop Grumman B-2 Spirit, possibly referencing its Ghost type again. Its habit of carrying Dreepy on its head may reference the parental behavior of amphibians, who often let their offspring live on their back.

Dragapult and Doraparuto come from the words "dragon" and "catapult". 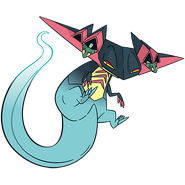 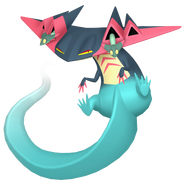