Dragalge is a large brown aquatic Pokémon that resembles a leafy sea dragon. Its main body is curved in way that resembles the number three. Its sides are a dull shade of purple with slender vertical lines. Its pectoral fins and tail fin resemble dried up kelp. It has a straightened brown snout. Dragalge has a red leaf-like crest and green antenna on top of its head.

Dragalge is an aggressive and territorial Poison-type Pokémon. One will spit a powerful acidic poison at anything that enters its territory. Legends suggest that Dragalge attacked and destroyed ships that wandered into seas where this Pokémon resides. Dragalge can spit poison strong enough to eat through the hull of a tanker; this territorial Pokémon will spit this poison at whatever trespasses their territories. As a result, it is said that ships sailing through the seas where they live never return.

They are also known for their stealth, concealing themselves in seaweeds, before assailing fatal hits of poison aimed at their unsuspecting prey.

While remaining as a ruthlessly dangerous creature, Dragalge love to sunbathe and stick out their heads from the ocean's surface; this allows Dragalge to release their draconic energies. Curiously, it is unknown why Dragalge tend to have good relationships with Dhelmise.

The acid Dragalge spits is capable of corroding metal, causing ships that wander into Dragalge's territory to sink to the bottom of the ocean.

Dragalge is the final evolve form of Skrelp at level 48.

Dragalge is based on a leafy sea dragon. Its Poison type may come from the fact seaweed releases toxic gases when it rots.

Dragalge comes from dragon and algae.

Its Japanese name, Doramidoro, is a portmanteau of dragon and 水緑 (aomidoro, Japanese for the Spirogyra type of algae). 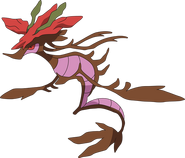 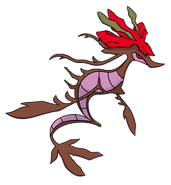 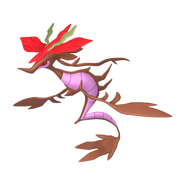 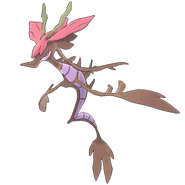 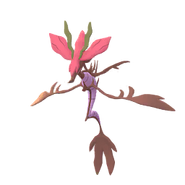