It's unknown what Dracozolt looks like if it's a uncombined fossil from two separate fossil Pokémon.

Apparently, after the two halves of the fossils were fused to create it, the rear end's muscles are used to produce its electricity. Dracozolt are believed to use their lower body to fight off enemies, which made it unbeatable, but it went extinct after it was depleted of its food source, plants. However, these are likely false, as it is a Pokémon made from two different fossils that each had their niches before going extinct.

Dracozolt appears to be based on the Crystal Palace Dinosaurs, a set of dinosaur skeletons that were misconstructed and are now deemed incorrect due to them either being mixes of more than one dinosaur or having incorrectly constructed skeletons altogether.

The head half may be inspired by paraves, a group of ancient dinosaurs that may have evolved into birds. It may also be based on the Archaeopteryx. Its tail half may be based on a Dacentrurus or some other type of stegosaurid dinosaur

Dracozolt (as well as the other Galar Fossil Pokémon) having the inability to breed may reference cross-bred or hybrid animals, which are born infertile (meaning they are unable to breed or have offspring).

Dracozolt comes from draco, which could come from the word draconic or could simply come from the Latin term for dragon, zap and jolt. 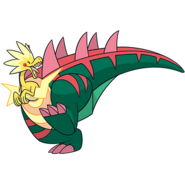 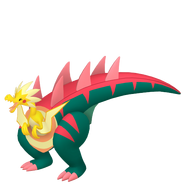