Dracovish is a hybrid of a fish and a dinosaur.

The fish head is blue with sharp teeth and two eyes with dashes for pupils. A red marking covers its forehead, which is surprisingly blue on its counterpart on Arctovish. It also has two fins.

The Draco part resembles the rear end of a green stegosaurus with red stripes and spikes. The part which is cut of from the torso is green and red.

Apparently, after the two halves of the Fossils were fused to create it, Dracovish were believed to have strong jaws and legs which could run at 40 miles per hour, but its head can't breathe unless it was submerged in water. It is believed to go extinct when it over hunted its prey. However, these are likely false, as it is a Pokémon made from two different Fossils that each had their niches before going extinct.

Dracovish made its debut in "A Pinch of This, a Pinch of That!", where it was restored from two different Fossils in the Wild Area. The Fossils were swapped during the restoration, which resulted in created Dracovish alongside Goh's Arctozolt. It was later caught by Ash after he befriended it.

Dracovish appears to be based on the Crystal Palace Dinosaurs, a set of dinosaur skeletons that were misconstructed and are now deemed incorrect due to them either being mixes of more than one dinosaur or having incorrectly constructed skeletons altogether.

Dracovish (as well as the other Galar Fossil Pokémon) having the inability to breed may reference cross-bred or hybrid animals, which are born infertile (meaning they are unable to breed or have offspring).

Dracovish comes from draco, which could come from the word draconic or could simply come from the Latin term for dragon, vicious and fish. 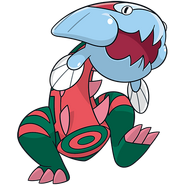 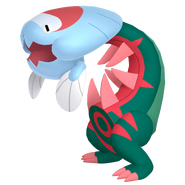