Delcatty Got Your Tongue

Abby is a character appearing in Pokémon: Advanced Challenge.

Abby is a former Pokémon Coordinator that won the Grand Festival on her first and only year with the help of her Skitty, Johnny. Later on, she met Dr. Moss, who treated Johnny following a Flygon attack. Abby was inspired to become as great a doctor as he was, and was one day awarded a Moon Stone by him for her breakthroughs in Pokémon massage therapy, evolving Johnny into a Delcatty.

Since there was no Pokémon Center nearby, the heroes came to Dr. Abby's clinic to treat Skitty, who inhaled some of Torkoal's smoke. Dr. Abby analyzed Skitty and massaged her pressure points. While Skitty was recovering, the heroes noticed a cup, which May identified as the Grand Festival cup, seeing Dr. Abby was a Top Coordinator. She also let them show her Delcatty, Johnny. Since Skitty, who recovered, started chasing its tail and disobeying May, Abby gave some balls to May for Skitty to juggle them and control its free, playful spirit. As a part of the plan, Team Rocket, disguised as travellers, had Dr. Abby heal their "injured" Meowth. In a moment of distraction, Meowth spoke some words, so Team Rocket grabbed Johnny and May's Skitty, then flew off in their balloon. Dr. Abby and the heroes followed them, seeing Johnny and May's Skitty freed themselves on their own. Despite his cute appearance, Johnny managed to inflict serious damage on Team Rocket, then used Blizzard, a move which May's Skitty tried to use. Once May's Skitty learned the move, Johnny and Skitty froze Team Rocket, who were blasted off by Pikachu's Thunderbolt. Abby was glad and bid the heroes farewell, who went to Verdanturf Town.

Once the heroes arrived in Verdanturf Town, May practiced for her next Contest and remembered the trick Dr. Abby showed involving Skitty juggling the balls. 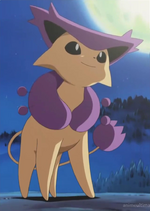