Doublade is a ghostly Pokémon that appears to be based on a haunted pair of swords. Each sword has a pink eye on each brown hilt. On the bottom of each hilt is a strip of pink cloth. When in battle, Doublade unsheathes its razor-sharp blades, which are silver, and holds its double sheaths behind it.

Doublade is formed by combining two Honedges. It is able to rub its dual blades together to create a high pitched sound that can disorient foes. The two swords converse telepathically and can carry out complicated attacks together. These attacks are very difficult for an experienced swordsman to block and can quickly rend an opponent to shreds.

Doublade is formed from two Honedges. It is able to rub its dual blades together to create a high-pitched metallic sound that disorients any opponent.

During the battle, it may be unsheathed from its scabbards.

Doublade can be evolved from Honedge at level 35 and with a Dusk Stone it can evolve into Aegislash.

Doublade is based on the concept of living magical swords. Appearance-wise, it most likely shows some characteristics of a coat of arms.

Doublade is a combination of double and blade. 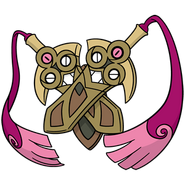 Add a photo to this gallery
← Honedge | Doublade | Aegislash →
Retrieved from "https://pokemon.fandom.com/wiki/Doublade?oldid=1204667"
Community content is available under CC-BY-SA unless otherwise noted.