Dottler is a small dome-shaped Pokémon. Its yellow shell is large and shaped like a geometric solid with triangular flat faces. Blue dots appear where the triangles meet. Its orange head can be seen from an opening at the base of the shell, as well as two flat blue feet. Its large, light blue eyes are rimmed by darker orange markings shaped like glasses, and two blue hairs similar to Blipbug's protrude from each side of its face.

Though Blipbug are already skittish Pokémon that spend most of their time in hiding, Dottler take this secrecy even further.Dottler remains stationary awaiting evolution most of the time, using its psychic powers only when necessary.When they sense something abnormal, their dots will begin to blink; this blinking will become faster as enemies approach, and more erratic when Dottler sense especially powerful enemies. If predators do manage to locate them, Dottler will release a burst of psychic energy to stun them before attempting to make their (sluggish) getaways. The longer Dottler go without food or water, the stronger their psychic abilities and thus their detection systems become. In fact, these Pokémon do not eat at all in order to maximize their psychic conditioning and thus hasten their evolutions.

Dottler is based on a ladybug pupa or a standard bug cocoon mixed with a radome. Its eyes (which resemble glasses) and its face feelers (which resemble a moustache) may take inspiration from stereotypical scientists.

Dottler comes from the words dot (as in a radar dot or the dots ladybugs have) and Doppler radar. 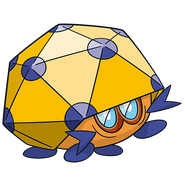