Diancie, Princess of the Diamond Domain

Name
ディアンシー
(Dianshii)
Notes
Depending on the context, "の" may be the possessive, unless it is used in the name of a character, Pokémon, or fossil.

Diancie is a rock/fairy-type mythical Pokémon and also the star of the Pokémon movie, Diancie and the Cocoon of Destruction.

Diancie appears as a princess in Diancie and the Cocoon of Destruction where she was unable to produce a Heart Diamond in order to save the diamond domain. She needed more power to create real diamonds and at the moment, her diamonds lasted for five minutes only. On elders' advice, she went on search of Xerneas to obtain Fairy Aura to form a Heart Diamond. However three thieves chased her in order to get diamonds.

When Ash and co. met her, they decided to help her to get to Xerneas. But they were interrupted many times by thieves. However they managed to reach to a forest where the cocoon of destruction, Yveltal resided. Due to continuous disturbance, Yveltal woke up and went on rampage and started to destroy everything by draining their life energy and turning everything to stone. Diancie vowing to never give up was able to mega evolve and created large diamond blocking Yveltal's power.

Later, Diancie thanks Ash and his friends and Bonnie gives her the diamond she made for her early and that never disappeared to remember the times they had together. She later waves goodbye to Ash and friend as they continue their journey. 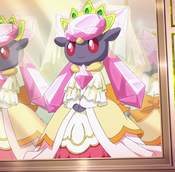 With the girls trying on swimsuits