Dhelmise is an aquatic Pokémon that resembles an anchor. A ship steering wheel acts as its head. The green algae mass is actually Dhelmise's body.

The anchor is rust brown and mottled with black spots, while the seaweed (which is real body) envelopes the bottom hooked area of the anchor to give an impression of it having 5 sharp teeth, and climbs up the thin pole and covers the anchor's shank. 5 shards of seaweed trail off as a star shape.

The ship's wheel is lavender on the exterior with a yellow inner rim. It is attached to the back of the anchor by its center and is free spinning. The noticeably damaged wheel is yellow and features six spokes and four handles, with two lavender stubs where the other handles should be. A simple compass, acts as its left eye, while it lacks a right eye.

Dhelmise is able to launch forward its anchor body with enough force to destroy the strongest of rocks. It can also render a Wailord, its natural prey, unconscious. Dhelmise can extend its body at a lengthy distance. It can also attach bits of sea debris and seaweed. In addition, Dhelmise binds its victims with seaweed while draining away their vitality; it also uses this tactic when hunting for Wailord.

It is said that Dhelmise was created when a piece of seaweed merged with the debris of a sunken ship.

Skrelp and Dragalge are known to hang around it. They hold a mutualistic relationship with wild Skrelp, who lead them to patches of wild kelp and in return are protected by these mighty Pokémon.

Dhelmise ability is Steelworker, which boosts steel-type moves by 50%.

As mentioned earlier, it attacks by hurling its anchor at the opponent.

Dhelmise was guarding a Mystic Water that Kanoa was trying to obtain. Popplio defeated it with Hydro Vortex.

Dhelmise appears to be based on a steering wheel and anchor salvaged from a shipwreck. Its method of draining Wailord of their life essence may be in reference to how whales can die or be injured by abandoned fishing equipment.

Alternatively, it may also reference two famous captains in literature, Captain Ahab (the main protagonist in the Moby Dick novel that dies tied to one of his harpoons trying to kill a whale, explaining why this Pokémon is a ghost-type and hunts Wailord), and the captain of the ghost ship Demeter in Bram Stoker's Dracula who is found tied to the ships helm after being drained (which explains why it drains health from its prey).

As for the seaweed, it may be based on the Codium fragile, also nicknamed as "Dead Man's Fingers". Its concept may be a homage to works by William Hope Hodgson, especially reminiscent of his Sargasso Sea Stories. The seaweed may also use the concept of mimicry, as it resembles a jagged smile upon wrapping around the anchor. Its Shiny coloration may take inspiration from red algae, one of the oldest types of algae.

Dhelmise comes from demise (to seek or hope for someones misfortune) and helm (the head of a ship). 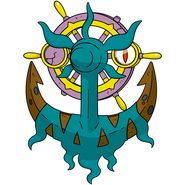 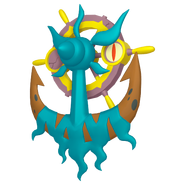