Dewpider is a green spider-like Pokémon. It has a water bubble covering its head which is bound by three green projections. Its body is mostly light-green in color except for its abdomen, which is dark-gray in color. It has a large dark-gray face, with two blue spikes on its forehead and a yellow mouth. Its wide eyes are blue and oval-shaped. It has a small stinger on the bottom of its abdomen.

When this Pokémon runs into a potential prey or predator, it smashes its water-bubble-covered head into them. They don't get along with Surskit as they fight over territory. They compete over who has a bigger bubble and the one whose bubble is smaller would back off.

It can breathe underwater but can't breathe air when going on Land, so it wears a bubble around its head to dissolved oxygen in the water bubble to breathe.

Dewpider possess the Water Bubble ability, which (presumably uses their bubble helmet to do so) weakens Fire type damage taken, powers up its Water type moves, and protects them from the Burn Status Condition. It's hidden ability, Water Absorb, allows them to heal themselves by taking a Water type move. Additionally they can also produce silk or their water bubbles from their abdomen.

Dewpider is based on a diving bell spider with elements of helmeted divers and astronauts. The blue markings on the top of its head resemble those of the happy-face spider, native to Hawaii.

Dewpider may be a combination of dew, spider, and possibly Jupiter, as its bubble resembles a space helmet and the iridescent swirls seen on soap bubbles have been used to model the movement and formation of clouds and storms on Jupiter.

Its Japanese name, Shizukumo, comes from 滴 (shizuku, droplet), 蜘蛛 (kumo, spider), 雲 (kumo, cloud, as clouds are made of water vapor and are where rain comes from) and 水蜘蛛 (mizugumo, diving bell spider). 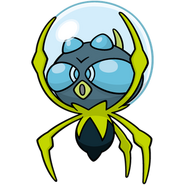 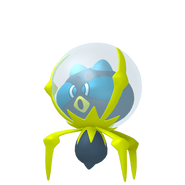