Dewott (Japanese: フタチマル Futachimaru) is a Water-type introduced in Generation V. It is the evolved form of Water-type Starter Pokémon of the Unova region, Oshawott.

Dewott is a bipedal otter-like Pokémon. It is mainly light cyan blue in color, with a navy blue apron-like fringe of fur around its thighs that bears two scalchops, which can be removed an used as swords when it battles. It has a black platypus-like tail and small black ears. Its feet and paws are black, with three digits on each. It has a tuft of blue fur sprouting from the back of its head. It has ovular black eyes, four white whiskers, and a round pink nose.

Dewott are often seen with a frown of intense concentration etched on their faces, and they are very serious and strict Pokémon that never neglect their training. They are very avid when it comes to practicing their dual-scalchop attack techniques, and never neglect to care for their scalchops.

When two Dewott meet, they will engage in a friendly duel in which each will show off their signature techniques, hoping to earn the respect of the other in combat. Dewott tend to live alone, but are not territorial and will allow docile people and Pokémon to wander through without conflict. Even trained Dewott will often prefer to remain alone, particularly when practicing. Despite their solitude, Dewott are very protective of their friends and families and will not hesitate to aid their loved ones if threatened.

Although extremely rarely found in the wild, Dewott are aquatic Pokémon, most likely found near the sea. This Pokémon lives in the water and can only be found in the Unova region.

Dewott fight by using two scalchops instead of one, using them as swords. Their skills are incredible, as each trains so hard to learn flowing double-scalchop techniques. They use many different forms for using the scalchops in battle, and each of them learns a different style for wielding their scalchops through strictly regimented training.

In PokéPark 2: Wonders Beyond, Dewott appears in the Cove Town as one of the trainers. After Oshawott defeats him in battle, he becomes Oshawott's teacher.

Dewott comes from dew, dual (because it has two scalchops), duel (due to its combat proficiency), and otter. It may also come from the author of The Last Samurai, Helen Dewitt.

Its Japanese name, Futachimaru, likely comes from 二つ (futatsu, two of something), 太刀 (tachi, a type of Japanese sword), 鼬鼠 (itachi, weasel, as otters are closely related to weasels), and 丸 (maru, circle, likely used because it was often used in male and samurai names). 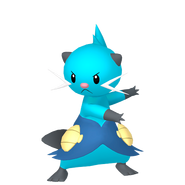 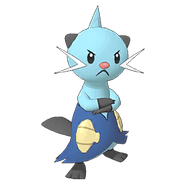 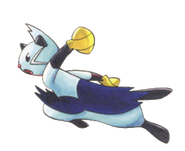 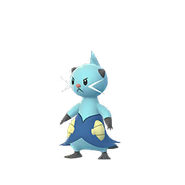 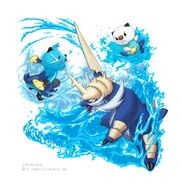