Detective Pikachu (Detective Pikachu ~ Birth of a New Combination~ in the Japanese version) is a Nintendo 3DS game that was announced in October 2013. It features as a Mystery Detective Game that the player can solve crimes with Pikachu as the player's partner and also introduced a new special rare Blue Pikachu to the series. The Japanese TV series "The Professionals" announced that a rare version of Pikachu will appear as the central antagonist in this game. This game is compatible with an amiibo, it is unknown if the Detective Pikachu amiibo will be only compatible only in the upcoming Episode 2 or will be added through an update in Episode 1 and it features an eighth amiibo to the Pokémon franchise. A movie based on this was released in 2019.

Two months before the events of the game, Detective Harry Goodman and his partner Pikachu are injured in a car accident while investigating a case. Shortly afterward, Harry disappears and Pikachu loses his ability to use moves and suffers from amnesia.

Tim Goodman arrives in Ryme City set to discover his father's whereabouts. As he exits Tahnti Station, two Aipom begin to cause a commotion and steal a young girl's necklace. Tim meets up with his father's Pikachu, who declares himself "Detective Pikachu". Tim discovers he can understand what Pikachu says and realizes he is the only one who can. Tim and Pikachu team up to help retrieve the girl's necklace. They interview witnesses at the scene, gather clues, take case notes, and eventually obtain the necklace that found it's way into a coat of a Burmy.

Pikachu tags along with Tim to his appointment at the Baker Detective Agency where Tim meets Mike Baker who tells him that his father disappeared while investigating strange incidents of Pokémon going berserk before he disappeared. Afterward, Tim and Pikachu visit Harry's apartment and look for more clues that might lead to his whereabouts. Tim discovers a map with three major areas circles on them. The pair decides to check out Litwick Cave first.

Inside the cave, Tim and Pikachu meet two reports for GNN: Emilia Christie and Meiko Okamoto. While filming a segment on tourism of the area, a wild Glalie suddenly goes berserk and causes the entrance of the cave to collapse. Tim and Pikachu enlist the help of Litwicks to explore the cave and of a Drifblim to ferry the group outside through a hole in the cave's ceiling. The next day, Pikachu takes Tim to the Hi-Hat Café and introduces him to the owner, Pablo Millan.

While at the apartment, Tim and Pikachu find a broken vial fragment and head to the Pokémon Comprehensive Laboratory (PCL) to investigate. Under the guise of "Tim Ottman", the pair infiltrate the lab and eventually find a matching vial to the fragment. The next day, Emilia and Meiko arrive at PCL to report on the organization's research when a Trevenant goes on a rampage. Tim and Pikachu capture the Gengar that caused it to go berserk, and discover a secret underground laboratory where researcher Carlos Hernando has concocted "R" — a substance that strengthens Pokémon, but also causes them to become violent.

A few days later, Tim and Pikachu travel to Cappucci Island to search for John Waals, the founder of PCL who began research on R ten years prior to the game's events. While on the island, they find that Waals is in custody of Ryme City Police Department on his involvement in a strange fog injuring Pokémon in the lake. With the help of aspiring Pokémon Ranger Milo Green, Tim and Pikachu discover that a Masquerain created the fog to protect the lake's Pokémon from an invading Crawdaunt. They prove the innocence of John Walls by linking the Crawdaunt to the leader of a resort developer Louise Mulligan.

Waals tells Tim and Pikachu that Harry came to him to ask about R and that R was synthesized from Mewtwo, whose Berserk Gene causes Pokémon to be violent. Walls shares that Harry had intentions to visit Fine Park, an amusement park in Ryme City. At the Hi-Hat Café, Tim meets with Emilia and Meiko and Roger Clifford, their GNN boss, and they show him footage of a fire at Fine Park that occurred a year before. Tim and Pikachu travel to the park and interview Pokémon about the incident; they learn a man with a Skorupi attacked Harry while he visited the park.

Tim and Pikachu head to GNN Headquarters and meet the president of GNN, Ethan Graham. The pair help a few employees around the company before reviewing the footage of the Fine Park accident. They discover Keith Norman, a director at GNN, had been present at the incident at Fine Park. They chase Keith to the rooftop before he escapes on a Noivern. Tim and Pikachu later infiltrate a warehouse in Rhyme Warf with the help of a Pansage and Spinarak and find Simon Yen, Waal's former assistant. Tim and Pikachu hid in a storage container to find who is behind the R distribution.

The duo finds themselves on board the luxury cruise liner, the S.S. Prime Treasure. Tim and Pikachu meet the Captain Walter Echkart. Tim and Emilia sneak themselves into a secret auction where R is being sold by Keith. Tim confronts Keith before he is arrested by Frank Holiday. Keith later reveals that another employee of GNN is still dispersing R.

Tim and Pikachu deduce that R will be traded in the central square during the Pokémon Carnival. They head there along with Emilia and investigate. Holiday notifies the group that there is a fourth type of R. They find a dispersing machine above the central square and realize that Roger Clifford is the true culprit. Roger takes Emilia hostage but Pikachu uses Thunderbolt to prevent Roger from escaping.

Mewtwo reveals to Tim that his father is still alive and that Tim will eventually find him as long as he continues his search. Tim carries Pikachu back to their apartment and the next day they embark on their search to find Harry.

The Japanese Poster of Detective Pikachu 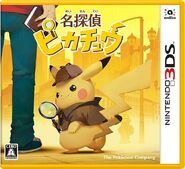 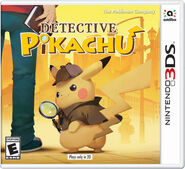 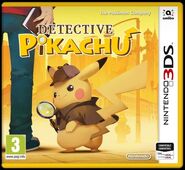 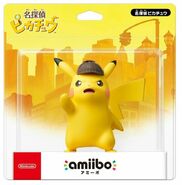