Deoxys is an alien-like bipedal Pokémon that has four Forms, each focused on a different stat. The main components that are constant for all four Forms are a dominant reddish-orange color, a greenish-blue face, and three greenish-blue dots on its back arranged in a triangle. Typically, there is a purple stripe running down the center of its face and a purple, crystalline organ in its chest. Its white, circular eyes are set inside rectangular, black eye sockets. It is shown in the anime, that Deoxys may have a green crystalline organ and facial stripe.

In its Normal Form, Deoxys has tapering legs with a segmented, vertical, blue stripe on the upper portion. The abdomen is black with vertical lines, while the majority of its skin is reddish-orange. The arms are capable of taking different forms, usually a pair of tentacles coiled in a double helix. One tentacle is the primarily skin color, while the other is light blue. Alternately, it can form more humanoid arms with a red top and blue underside and a five-fingered hand. This Form has a blunt protrusion with a single blue stripe on either side of its head and stubby tail.

While in its Attack Form, its legs remain tapered. However, its blue stripes are no longer segmented and run the entire length of the leg and there is now a large spike on the knee. Two pairs of whip-like tentacles with pointed tips, one reddish-orange and one blue, replace its previous coiled, blunted tentacles. The protrusions on its head are now triangular with an additional one extending from the top of its head. Most of its reddish-orange skin has receded, revealing a striated, black chest and abdomen. Finally, its tail is now longer and more pointed.

Deoxys's Defense Form has bulky, wide legs that are somewhat flat at the end with a bluish-green spot on each knee. It retains its two pairs of red and blue tentacles, but they are now flat and broad. The head has fused with its body and all protrusions are gone, causing it to resemble a helmet. The reddish-orange skin now covers the entire body, so none of its inner black portion is visible. There is now a single blue stripe on each shoulder, and its tail has disappeared.

The Speed Form of this Pokémon has a sleek black body with thin striation. The reddish-orange skin now covers only its head, hip joints, and the area around its crystal. There is now only one tentacle on each side of its body, one red and one blue. The protrusions on its head now point upward and the back of its head now forms a long spike. There is a long, thick blue stripe running down the center of this longer protrusion. More blue stripes appear on either hip joint and on its legs.

For a creature of pure logic and stoicism, Deoxys has quite a unique nature. Some can say it is vengeful, for it's rivalry with Rayquaza has been highlighted a few times throughout the series. However, despite being alien in origin, Deoxys like all other Pokémon can be befriended given time.

Deoxys can change its form to adapt and dominant in the Speed, Defense, or Attack stats though it is usually caught with normal stats at first; the stats of the normal form are still extremely unbalanced, as the two Attack stats and the Speed stat are much higher than the Defense or HP stats. Deoxys is a very intelligent extraterrestrial creature, who travels to other worlds inside of a meteor. Very little is known of its origins, other than it is a mutation of an alien virus that was exposed to a mysterious laser. Deoxys also seems to be able to regenerate lost appendages via it's arms, and shown to have the ability to make far weaker copies of itself.

Another Deoxys appeared in the episode "Cheers On Castaways Island!", where it transformed into a stone after struck by a thunderbolt. Near the end, it transformed back into Deoxys and protected Ash, Brock, Dawn, the Corphish and the Mantyke from the meteors that dropped down as it attacked Jessie's Yanmega.

Deoxys appeared in the movie Destiny Deoxys where the purple one tried to free the green egg trapped on the meteorite, however it was attacked by Rayquaza after being mistaken as an intruder for trespassing in its territory. They eventually had a duel somewhere in the arctic where a group of researchers witness the fierce battle between the two, as Deoxys was about to attack, the electrical surge shielded Rayquaza from its vision, giving Rayquaza the opportunity to regain strength, finally Rayquaza manage to defeat Deoxys and fly back into space, while the green egg in the meteorite was brought along by the researchers.

Four years later, the purple Deoxys had fully healed and track down its friend to LaRousse City, it causes a blackout to the entire city and remove all of the city's inhabitants in order to fulfill its search for its friend, however Rayquaza sensed its presence and headed to LaRousse City, Deoxys created a shield around the city, but Rayquaza found a way in and defeated all of the Deoxys clones. Ash and the others were able to provide enough amount of energy to revive the green egg, which hatched into the green Deoxys. The green Deoxys tried to stop the conflict, however the city's security system became haywire and attacked Rayquaza, the two Deoxys helped to defend Rayquaza, however they were overrun by the security robots, luckily Ash was able to deactivate the robot leader using the ID card, Rayquaza now convinced that they weren't intruders flies back to space, the Deoxys bids a farewell to everyone and leaves for space.

Deoxys is based on a DNA molecule, common depictions of aliens, and a chromosome. Its backstory may come from panspermia, the idea that life on earth came from chemicals or microbes that came to Earth through meteors. It may also be a reference to The Andromeda Strain, a novel by Michael Crichton in which an alien virus comes to Earth on a fallen satellite. 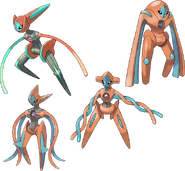 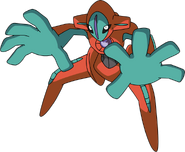 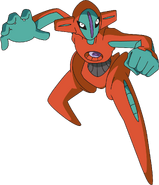 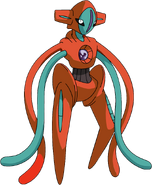 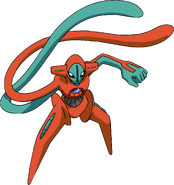 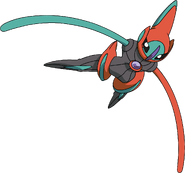 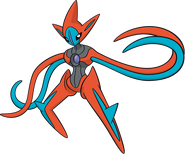 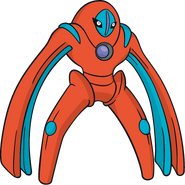 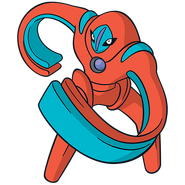 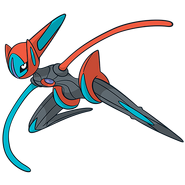 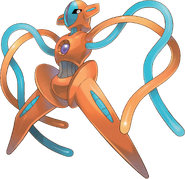 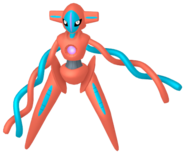 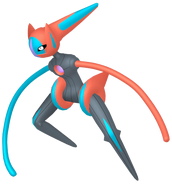 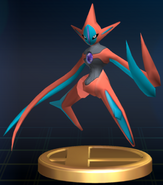 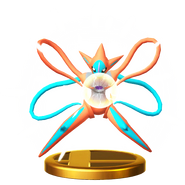 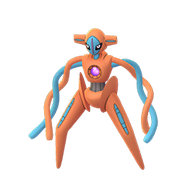 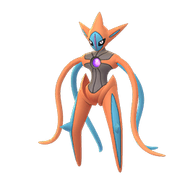 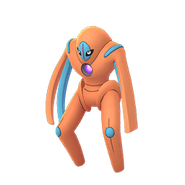 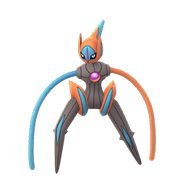 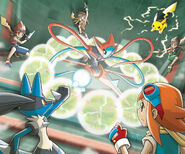 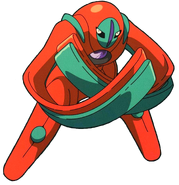 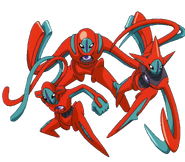