Delphox (マフォクシー Mafokushii) is a Fire/Psychic-type Pokémon introduced in Generation VI. It is the final evolution of Fennekin, the Fire-type starter from Kalos.

Delphox is a tall, bipedal foxlike Pokémon that resembles a witch or sorcerer. It has a long and pointy distinctly vulpine muzzle with a round orange nose. Its eyes are flame-orange. The fur on its chest is bright yellow, and it has a white patch on its belly. Delphox's body is mainly covered in long, shaggy maroon fur, resembling a robe or dress, with bright orange flame-shaped patches on either side. Its long, thin arms are covered in fluffy maroon fur that appear to be the sleeves of its robe. It has large bright yellow ears with long orange fur tufts protruding from the inside; these fur tufts grow hotter when Delphox becomes excited. It has a bushy yellow distinctly foxlike tail.

Delphox has small clawed black feet and paws. It is dexterous with its hand-like paws, and can pick up objects, as it is seen with a flaming branch that it uses as a wand when fighting.

Delphox uses its flaming branch as a wand to emit blasts of flame. It also uses pyromancy by gazing into the flame at the tip of its branch to achieve a focused state, allowing it to see into the future. Delphox can create vortexes of flame to sweep away its opponents.

Delphox evolves from Braixen at level 36 and is the final evolved form of Fennekin.

Delphox is based on a fennec fox and kitsune, a fox from Japanese mythology that is associated with fire and witchcraft, as well as having the ability to turn into beautiful women, possibly explaining Delphox's more anthropomorphic figure. It may also be based on kitsune-mochi, sorcerers who derive their powers from kitsune. Its fur design is also reminiscent of the cloaks of sorcerers. Its fire typing may also derive from witch hunts, an event that usually ends with someone being burned once they are accused of witchcraft. It may also be based on the mage class in some RPG games.

Its Japanese name, Mafokushī, comes from 魔法 (mahō, magic), fox, and foxy (literally meaning fox-like, figuratively meaning attractive and seductive, as its design invokes that of a human woman). It may also incorporate focus, as magic would likely involve a lot of mental focus and also due to its psychic typing. 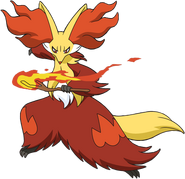 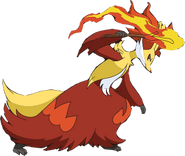 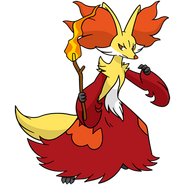 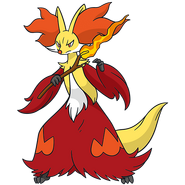 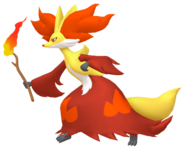 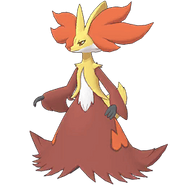 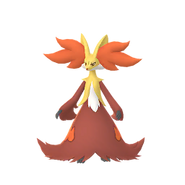 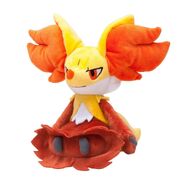 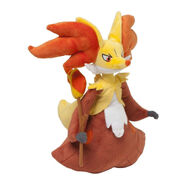