Delibird is a red, penguin-like Pokémon with a white, hollow tail. Its face and chest are covered in white feathers with two, three-pointed crests above its eyes. Black markings surround its circular eyes, and it has a light yellow beak and feet. There is a single white spot on its stomach. Its feet have two digits each.

Delibird is omnivorous. It carries food bundled up in its tail. It normally gives stored food to its chicks, but has been known to share its food with humans stranded on icy mountains. In a flock, the Delibird with the largest tail is its leader. Delibird tends to live in mountainous regions, making its nests over sharp cliffs; one notable area of the world is around Mt. Everest.

Delibird's signature move, Present, allows it to carry special items in its tail that may cause damage or heal its opponent.

Delibird does not evolve.

Delibird is a mixture of the words delivery and bird. 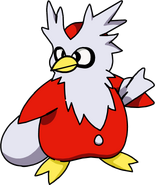 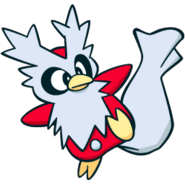 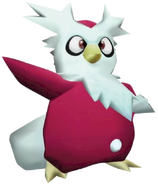 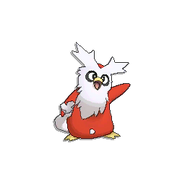 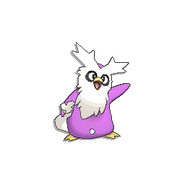