Dedenne is a small, rodent-like Pokémon. Most of its round, pudgy body is a vibrant orange color, and it has a cream-colored belly. It has a very long, black, wire-like tail and spiny, black whiskers on its reddish-orange cheek patches. It has small oval ears that are black on the outside with cream-colored insides. Dedenne has small, black eyes, a tiny black nose, and small, sharp incisor teeth. Its feet and paws are short and stubby, with tiny digits.

Dedenne send and receive electrical waves using their whiskers in order to communicate with others over vast distances, as a means to alert the location of food or electricity. They use their long cord-like tail to absorb electricity. Due to their rather weak self-generation for electricity, they tend to sneak into homes and steal electricity from people's outlets.

Being a member of the Pikachu-family Pokémon, Dedenne can emit electricity from its cheek pouches.

Dedenne does not evolve.

Clemont caught a Dedenne in A Shockingly Cheeky Friendship! as Bonnie wished for it.

Dedenne is based on a hamster or woodland jumping mouse. Its type could be a reference to La petite souris (the little mouse), the French version of the Tooth Fairy and is depicted as a mouse. Its whiskers resemble analogue TV antennae. Its tail resembles a chewed electrical chord, as mice are often considered pests for chewing on wires. 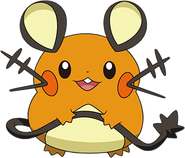 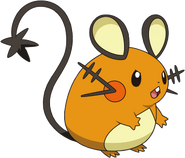 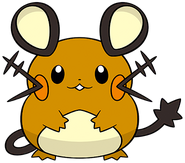 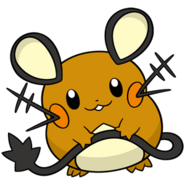 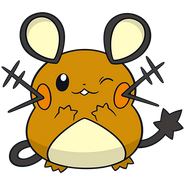 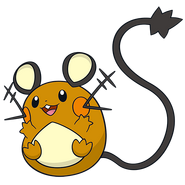 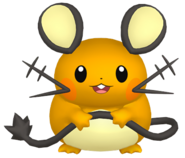 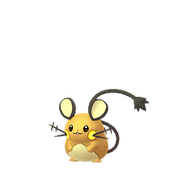 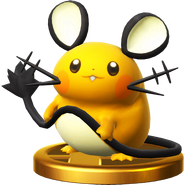 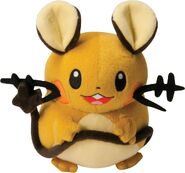