Decidueye (ジュナイパー, Junaipaa) is a Grass/Ghost-type Pokémon introduced in Generation VII. It is the third and final evolved form of Rowlet.

It has a Grass/Fighting Hisuian form introduced in Generation VIII.

Decidueye is a tall, avian Pokémon that resembles an owl. The upper segment of its face is black with a thin, orange cover like a mask circling its eyes. It has orange pupils and a green hooked beak. The feathers covering its wings and back are light brown, while its body is fundamentally white with the appearance of a six-pack. The three plumes at the tip of each wing are organized like fingers and have lighter tips. It has long legs, feet with two toes confronting forward and two in reverse, and short dim green claws. Its tail comprises three long, green leaves. On the front of its wings is a line of orange upside-down triangles pointing downward. It has a green leafy hood that covers its head and shoulders. Around the head, the hood shapes many pointed projections that stretch out over its face. It has a white plume with a red base that reaches out from the highest point of its hood. On its chest is an orange X-shaped marking made out of dead leaves with two vines. Pulling on the vines shuts the hood over Decidueye's face similar to a hoodie.

Hisuian Decidueye has a smaller wing area and thicker legs. The plumes around its ankles are longer, and its feet are black with white talons. Its tail feathers are red, as are its head and neck covering, with orange and white accents, and together they resemble an ayaigasa. Its wings appear to have more layers, allowing the rachises of its feathers to insulate it from the harsh conditions of the Hisui region.

Decidueye are normally calm and collected but panic easily when taken by surprise. One will tug at its "hoodie" if missing a very important or accurate shot. When a Decidueye decides upon a target, it will seemingly disappear from view as it begins to stalk it from afar. Once its victim completely loses track of it, it will strike with a single arrow quill, plucking it from within its wing and stringing it on its vine-like tassels. Many trainers still admire Decidueye for their spectacular precision and stealth, making them one of the most popular starters in Alola.

While Hisuian Decidueye still maintain the ability to fire off their arrow-like feathers from a distance, they generally prefer physical fighting. In Sinnohan mythology, they are fierce and stalwart fighters, who are heavily associated with honorable combat. Hisuian Decidueye are solitary wanderers that never sleep in the same place two nights in a row, and never have a set of territory. They are said to follow their own personal codes of honor, defending those who they see are in need before leaving as quickly as they appeared. Local village legends commonly tell the tales of individual Hisuian Decidueye who helped the locals in some way. Even today, novels and films that depict these Pokémon are quite popular in Sinnoh and other regions.

Although mostly deliberately engaging in close-range combat to overpower opponents, they can still tolerate ones that display no hostility towards them.

By creating an elastic band from their wings, Decidueye can fire their feathers like arrows in a tenth of a second. Unfortunately, their bodies are so large that they can't fly very easily. They are capable of striking a target that is more than a half a mile away.

Aside from being able to shoot their arrow-feathers, Hisuian Decidueye can use air inside their rachises to insulate them from the cold climate of Hisui. Their bodies are light enough to fly above water. They are also known for their mighty legs that are capable to delivering powerful blows aimed at their enemies, before further assailing the enemies with a flurry of their arrow quills.

Decidueye is the evolved form of Dartrix as of level 34. It is also the final evolution of Rowlet.

Decidueye is based on the Stilt-owl, an extinct Hawaiian owl, which its Ghost typing possibly alludes to. It may also take inspiration from the folklore character Robin Hood, a legendary outlaw who was known for his skill in archery and stealing from the rich and giving to the poor.

Its Hisuian form takes inspiration from rōnin ("drifters" or "wanderers"), the mostly master-less samurai, but many also take up duties voluntarily to protect proletarians from the tyranny of actively powerful and corrupted samurai.

It may also be inspired by Cikap-kamuy, the Ainu god of owls and the land.

Decidueye may come from deciduous, referring to a type of forest and trees/plants whose leaves fall off seasonally, and deadeye, hawk-eye, or bullseye, marksmanship terms meaning someone/something is very accurate.

Its Japanese name, Junaipā, is derived from 樹 (ju, tree), juniper (a type of tree) and sniper (someone who fights with firearms or bows over long ranges or from concealed areas). 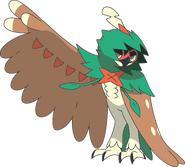 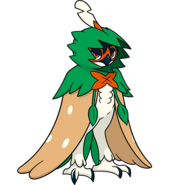 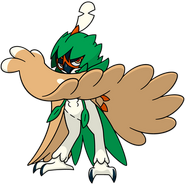 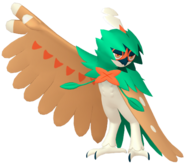 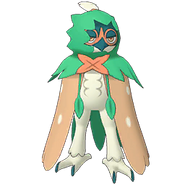 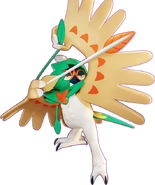 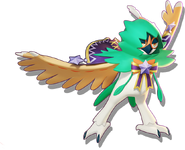 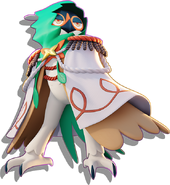 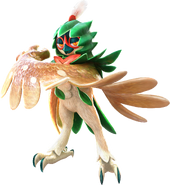 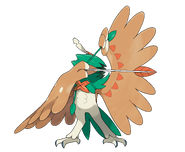 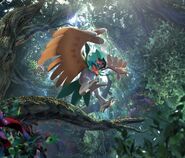 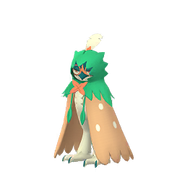 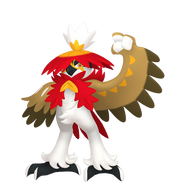