Dartrix (フクスロー Fukusuroo) is a Grass/Flying-type Pokémon introduced in Generation VII. It is the middle-evolved form of Rowlet, and evolves into Decidueye.

Dartrix is an owl-like Pokémon. Its plumage is white, but it has brown feathers on his head, shoulders and back. Its heart-shaped, facial disc is also white, and it has black eyes with dim irises that normally seem shut, a squat beak that has a white upper jaw and orange-dark colored lower jaw, and two short tufts of quills on the back of its head. Two green leaves bend around its face, looking like an asymmetric haircut; the leaf on its right is longer than the one on the left. Under its chin are two smaller leaves that resemble a bow tie, and there are two pointed ones on its rear that form its tail. Its wings have two tan spots on the upper side and leafy plumage near the body on the underside. Inside the leaves under its wings are two orange-dark colored items like seeds. Dartrix has orange-dark colored claws with two toes confronting forward and one confronting in reverse.

Dartrix is extremely sensitive to other presences in the area around it and can detect opponents behind it and throw feathers to strike them without even seeing them. This Pokémon conceals sharp-bladed feathers inside its wings, showing astounding precision as it sends them flying in attack. It can go beyond propelling its blade quills in simple straight lines—it can even bend these feathers to change their trajectories.

Revealing a certain snobbishness in its personality, Dartrix cares a great deal about its appearance, grooming its feathers in every spare moment. In truth, it's also a bit of a birdbrain, with a tendency to bungle things up. Once it makes a mistake, it sometimes gets into a desperate struggle to gloss over the situation and ends up making a bigger mess than ever. It also cares about its cleanliness: it can feel bothered by its dirty or ruffled feathers that it can't focus on battle. When it loses its focus, it sometimes even retires from the battle on the spot.

Dartrix is the evolved form of Rowlet as of level 17. It evolves into Decidueye at level 34.

Dartrix is based on the barn owl, as it has a similar appearance. Its floppy bangs resemble those of the stereotypical snobbish metro image.

"Dartrix" comes from "dart", referring to the sharp leaves that it throw like darts and Strix, a genus of owls. It may also incorporate "tricks", akin to its trick shot abilities. 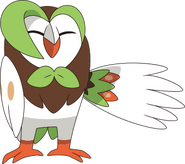 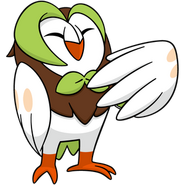 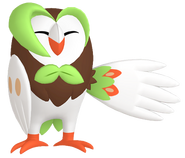 Add a photo to this gallery
← Rowlet | Dartrix | Decidueye →
Retrieved from "https://pokemon.fandom.com/wiki/Dartrix?oldid=1329312"
Community content is available under CC-BY-SA unless otherwise noted.