For Blue's sister and the granddaughter of Professor Oak, see Daisy Oak.

Pokémon the Series: The Beginning
Spin-off(s):
Pokémon: Side Stories

Daisy is one of Misty's older sisters, and is one of the three older Gym Leaders of Cerulean City for the Indigo Pokémon League.

Daisy is the eldest sister of Cerulean Gym. She dresses in glamorous outfits and loves shopping (similar to Lily). At first, she was fastidious and delicate, but in a battle of Pokémon Chronicles, she fought with Misty to defeat Team Rocket. Daisy doesn't like to fight so that the arrival of Ash to the gym meant a real "hassle" for her. She even nearly offered to give Ash his Cascade Badge for him to leave without a battle.

She is irresponsible and enjoys directing the actions they do in the gym. She's a show off in front of Misty and says she is the least stressed. Only time would show what she can do compared to her little sister, as she learns to fight like a real Water-type Pokémon Gym Leader.

She likes Ash, the first time they see him saying goodbye to "never change" and the second time he is greeted warmly, unlike Brock who she is indifferent towards. They aren't shown in any Pokémon games. She was voiced by Lisa Ortiz in the English Dub.

In an episode of Pokémon Chronicles, to get back the Luvdisc Caserin and Luverin, Daisy had to get into the character of High-Speed Hannah from one of her movies by putting on a pair of fingerless gloves and sunglasses. When that happens, Daisy really gets into character. Her personality suddenly changes from prim and prissy to rough, tough, and a pretty reckless driver. However, when she gets back on solid ground, and takes off her gear, she reverts to Daisy again.

In the Poké Problem segment of "Alola, Kanto!", it is revealed that Daisy along with Violet and Lily left the Cerulean gym to go on a trip, leaving Misty to take care of the gym. 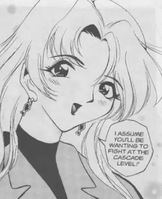 Daisy in The Electric Tale of Pikachu (manga)