A Rivalry to Gible On!
フカマル…ゲットだぜ！

A Rivalry to Gible On! (フカマル…ゲットだぜ！ Gible... I Got It!) is the 41st episode of Pokémon: DP Galactic Battles.

The heroes enter a Pokémon Center. Brock flirts with Nurse Joy, while Khoury takes notes. As he continues, Brock gets attacked by Croagunk's Poison Jabs. Suddenly, three trainers come in, with their Pokémon defeated. Nurse Joy reports there is a wild, rogue Gible who has been attacking the Pokémon. With Brock's help, Nurse Joy goes with the trainers to take care of the Pokémon. Hearing all about this makes Ash go to get that Gible, so Dawn, Lyra and Khoury go after him. As they go, Lyra asks Dawn how does she think of Khoury as a boyfriend, making her upset. Ash and Khoury ask if something is wrong, though Dawn negates anything. Lyra knows that Dawn and Khoury would be a perfect match, making Dawn even more upset.

The heroes continue and soon get out of the way, as a giant boulder almost falls on them. They see the rogue Gible, as it uses Strength to throw boulders. Seeing how Gible used Rock Smash on the boulder, Ash has no doubts about catching it. Dawn advises Khoury to stand back, but Khoury also wants Gible. Ash sends Buizel and Khoury his Totodile. Gible uses Sandstorm, which causes the heroes and the Pokémon to be swept by the attack. Seeing how Gible now digs, Ash wants even more to get it, while Lyra offers help, telling Dawn to keep an eye on Khoury. Nevertheless, they all go after it. Team Rocket saw the battle and Meowth believes the boss would use Gible for any beach games.

As they got separated, Lyra points for Ash where Gible is. Buizel uses Aqua Jet, but misses. It tries using Water Gun on Gible, but Gible evades and comes out of the grass. Buizel uses Sonic Boom, though Gible dodges, Buizel uses Aqua Jet, but misses. Lyra and Ash run away from it, so Pikachu uses Thunderbolt, but Gible dodges and uses Sandstorm on them, then disappears. Meanwhile, Khoury decided to wait for Gible and gives Dawn a fishing stick, which should lure Gible to eat the food he made. Khoury has got something and pulls, revealing that was Dawn's Piplup.

Ash decided to chase Gible out, as he and Lyra got two sticks and move the grass away. After some time, Gible becomes angry and comes out and goes after Lyra. Though Lyra gets on a rock, Gible smashes the rock. While Lyra is hurt a bit, she orders Ash to get that Gible. Ash warns Dawn and Khoury Gible is coming, so Buizel uses Aqua Jet and Totodile Aqua Tail. However, Gible goes on side, causing Buizel and Totodile to hit each other instead. This causes them to get into a fight. Dawn has got something, which is Piplup (again). So, Lyra and Ash accept to use Khoury's fishing stick method. They put the food he made on the end of the stick and toss.

Meanwhile, Team Rocket fishes in a lake, but do not get anything. Dawn got something and Lyra suspects it is Piplup. However, Piplup stands near Dawn, so they see Gible got the bait. However, it is too powerful, so Khoury lends her a hand, making Lyra's claims to be true (for her, at least). Gible got the hook in the mouth and pulls Dawn and Khoury, then uses Rock Smash on the rock they were standing on. Gible runs away and the heroes follow it. Khoury hears Gible is near, so Lyra sends Marill, who hears where Gible is. It points in a direction, so they go there. Though Team Rocket see the twerps running, they see "Gible" in the water and get in a bot to catch it.

Khoury suspects Gible is in the cave nearby. Seeing that Dawn and Khoury go somewhere, Ash rushes and falls in a hole dug by Trapinch. Nevertheless, Khoury grabs him and pulls. Dawn is angry for such an act, making Ash tell her that he will hear her advice when he wants it. Dawn becomes mad, so Khoury decides to calm them down. Ash and Dawn ignore him, causing Lyra to believe that she and Khoury might be one for another. They enter the cave and split. Lyra's Marill senses that Gible is below, so Ash sends Monferno, who uses Dig. This causes the Diglett and Dugtrio to be angry and they get sent into deeper portions of the cave, so Dawn and Khoury go after them.

Though they lost them, Khoury and Dawn soon get chased by an Onix. They split up, causing Onix to crash into a wall and making Zubat upset. Ash calls Monferno back and soon hears (along with Lyra) Dawn and Khoury screaming. They soon split up, as the Zubat chase them away. While Dawn is alone, Ash soon finds her. Lyra, on the other hand, does not see anyone, but gets a call from Khoury, who promises to find her. By Khoury's orders, she taps a rock on the wall and he hears that and knows where she is. Soon, Khoury finds her and they got found by Ash and Dawn. While Ash still wants to get Gible, Khoury thinks it is best to find a way out. He raises his finger in the air and detects the breeze and they all go in direction Khoury pointed. Seeing how he changed, Lyra begins to like him.

They go out and soon see Gible, who wants a fight. Ash wants to fight it, but Khoury gets in his way, even Dawn and Lyra convince him to give Khoury a shot. Khoury sends Totodile, who uses Aqua Tail, but gets collided by Sandstorm. Gible throws a rock using Strength, though Totodile crunches the rock. Totodile throws a rock using Super Power, but Gible's Rock Crush negates it. They crash the rocks on their heads using Strength and Super Power. Gible gets a huge rock and manages to split it in half by crashing it on its head. Gible got injured, so digs to escape. Totodile fills the hole using Water Gun, forcing Gible to come out and knock it down using Aqua Tail. Khoury throws a Poké Ball and catches the Gible.

Team Rocket is still fishing and almost go to shore. However, Jessie got "Gible", which is a Sharpedo, who chases them. The heroes are at dinner, as Brock and Nurse Joy got finished from healing the Pokémon. Khoury and Lyra reminds Dawn of the Lilypad Town's Contest and promise to her they will be there. 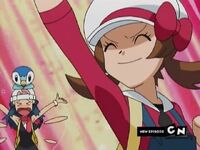 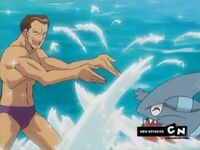 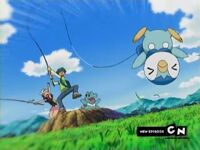 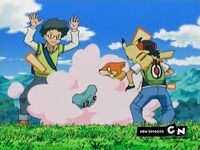 Buizel and Totodile get into a fight 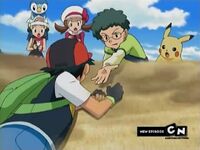 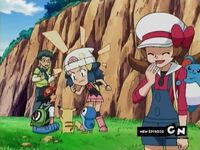 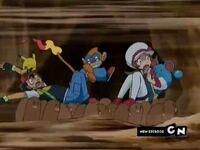 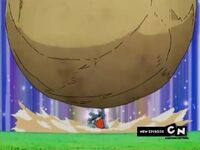 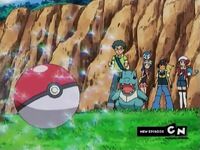 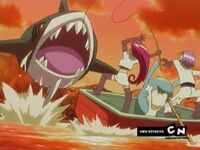 Retrieved from "https://pokemon.fandom.com/wiki/DP145:_A_Rivalry_to_Gible_On!?oldid=1284663"
Community content is available under CC-BY-SA unless otherwise noted.