Get Your Rotom Running!
羊羹とロトム！

Get Your Rotom Running! (羊羹とロトム！ Youkan and Rotom!) is the 1st episode of Pokémon: DP Galactic Battles.

Ash contacts Prof. Oak to let him know he is in Canalave City. Grotle jumps on Ash to show Turtwig evolved and Dawn's Piloswine does the same on her. Oak recites some poetry, amazing Dawn. Oak recalls there is a good Gateau made in Canalave City and recommends them to try it. Team Rocket overhears them and will try this food before them. They arrive to the mansion and Meowth unlocks the door and they enter it. The gang is near it, but a worker stops them, as there are rumors of a ghost wandering the halls. He doubts the stories, but still recommends not to go inside. The gang still wants to go, as they already came this way.

Team Rocket is searching, but find nothing. James found a candy bar, but knowing his comrades would fight over it, he puts it in a microwave, then goes away. The microwave turns alive and eats the candy bar, then shifts back. Jessie also has luck and puts it in a fridge, which turns alive and also eats the candy. Meowth found a cookie and puts it in a microwave where James put his candy, but is also eaten. Team Rocket goes out of the room happily, but return. Seeing there is no candy left, they accuse each other of eating the food.

The fridge approaches them and uses Blizzard, chasing them away. The microwave is also in front of them and becomes alive, so they use an air shaft to escape. They go to get out, but the door is locked. The gang is in front of the mansion and see the door opened, mysteriously enough. They peek inside and Pikachu goes after something. He sees nothing, but warns Ash he saw something. An microwave is lying around. They spot the generator, while Pikachu goes inside the microwave. The microwave becomes alive and Pikachu uses Thunderbolt, which the generator absorbs. Pikachu tells the microwave is very odd, but the attack on the generator causes the lights to be turned on.

Team Rocket is also pleased to see the lights turned on, and spot the food they were looking for is just near them. The heroes hear an automated message and would like to search for the recipe. Meowth uses his claws, but the glass cannot be broken. The heroes enter a room and spot that the recipe and the ingredients are here. Brock offers to cook while Dawn and Ash train. Chimchar uses Flamethrower and Pikachu evades. One Flamethrower hits a lawnmower, but it becomes alive! Ash, Chimchar and Pikachu run into the house, but when they look again, it is just an ordinary lawnmower. Dawn's Buneary uses Dizzy Punch, but Dawn feels a breeze and sees the fan is turned on. She turns it off and orders Piplup to use Bubble Beam. However, the fan turns alive and haunts Dawn, Piplup and Buneary.

Dawn and Ash tell each other what happened. They go to warn Brock of the ghost, but get chased by the lawnmower. While they are safe, they still need to warn Brock. They run as soon as they spot the washing machine moving. They use the elevator and when they get out, they manage to get into the kitchen before the fan gets them. They warn Brock what happened, but he does not believe them and he gets the food out. Ash and Dawn point at the fridge behind them. When Brock turns several times around, finally he sees the fridge being alive and they all get out. They get attacked by an oven, which used Flamethrower. Pikachu uses Thunderbolt and Piplup BubbleBeam on the oven.

A small Pokémon comes out, revealing to be a mischievous Rotom. The Rotom goes in a lawnmower and chases them. They go up the stairs, but the Rotom goes in a washing machine and attacks them, sending them out of the mansion. Pikachu uses Thunderbolt and Pachirisu Discharge, but the Rotom proves quite strong, as it negates their attacks. With more power, the Rotom gets attacked and defeated. Rotom wakes up and it just wanted some fun. Piplup pats it and gets electrocuted. It is still mischievous and electrocutes Brock, Ash and Dawn, then goes away. Team Rocket were unable to open the food display, so Jessie thinks some words should do and the display opens. They eat the food, but it is quite old and tastes horrible. On the other hand, the heroes taste Brock's Gateau and it tastes wonderful, so they go to send it to Prof. Oak. 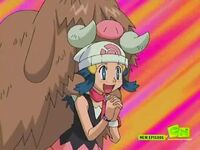 Dawn is amazed by the poetry 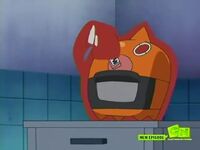 The microwave eats the candy 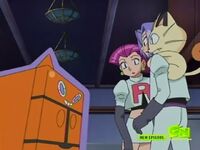 Team Rocket and the walking fridge 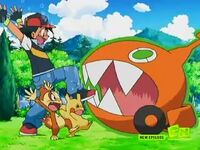 Ash, Chimchar and Pikachu get scared of a lawnmover 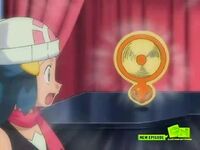 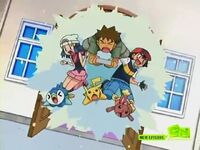 The heroes get flushed out 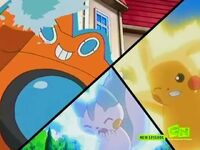 Pikachu and Pachirisu vs. the washing machine 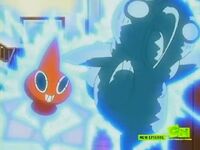 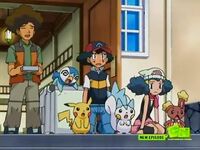 The heroes are left with bad hair 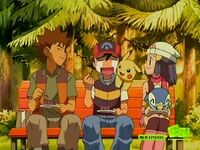 The Gateau is *very* delicious
Add a photo to this gallery

Retrieved from "https://pokemon.fandom.com/wiki/DP105:_Get_Your_Rotom_Running!?oldid=1308295"
Community content is available under CC-BY-SA unless otherwise noted.