Dawn's Swinub evolves into Piloswine.
Sleepless In Pre-Battle! (クレセリアＶＳダークライ！ Cresselia VS Darkrai!) is the 52nd and final episode of Pokémon: DP Battle Dimension.

The heroes came to Canalave City's Gym. Ash yells that it is known he is here, but nothing is heard. Suddenly, a person screams. A man comes out, as he had a terrible nightmare, causing him to be sleepless. Ash introduces himself as a challenger, but sadly, the man responds the Gym Leader went to Iron Island for training, but will let him know. Even if the man sleeps a bit, he is awoken and screams, as he had a nightmare. As they go to shop, Brock wonders why is there nobody present, as it should be one of the busiest places on the island.

Brock spots a Police Office and goes to meet Jenny. Like the man, Jenny seems also sleepless. Jenny explains them some days ago people of the island began to have nightmares. Jenny knows it is the doing of a Darkrai - a Pokémon that brings nightmares, but Cresselia, a Pokémon from nearby island, makes sure to defeat it. This year, however, Darkrai showed earlier up and Cresselia is nowhere to be found. Jenny got herself a Lunar Wing, but she still has nightmares. Dawn has also a Lunar Wing and it works good. Brock has a look and spots it is a fake feather. Jenny gets mad and goes to get the seller.

Not surprising, Team Rocket is selling fake feathers. Team Rocket has designed the machine to bring nightmares, though it affected them as well. Meowth likes the fact to use Pidgey feathers and bend them, then put them in color to make them look like Cresselia's feathers. Jenny and the gang heard this and wants to place them under arrest. Still, Pikachu uses Thunderbolt and blasts them off. The machine is destroyed and Jenny believes the people should sleep in peace. Because they solved the case, Jenny gives them dinner and a room for the night. When they sleep, Ash has a nightmare where he saves Pikachu from falling, but a creepy Pokémon appears - Darkrai. Everyone wakes up and think Darkrai has awaken, so they need to go to Fullmoon Island to get Cresselia.

Team Rocket also follows them, hoping to get Cresselia. They spot many cliffs, so they go in a cave. Jenny tells that when Darkrai appears, Cresselia can be found on a shrine. Ash sees some light and gets a Lunar Wing, a feather from Cresselia. Piplup smells it and goes in a direction. Piplup stopped, thinking it must be where Cresselia went by, but is frightened (for a while), as a Psyduck emerges. Dawn sends Swinub to track the scent instead. Though fast, Swinub took them to the shrine. Cresselia comes from the sky, bring all dazzling, so Team Rocket fires the net and capture it. Team Rocket also fires nets on the gang. Pikachu uses Thunderbolt, but accidentally hits Ash. Team Rocket go to get the Pokémon, but Swinub's Take Down stops them.

Though it continues, Swinub fails to stop them. Dawn wants it to stop, but it still continues. So, Meowth hits it with robot arm. Swinub is hurt, but evolves into Piloswine. With so much power, Piloswine blasts Team Rocket off with a Take Down. Now, the gang frees Cresselia, allowing it to go to Canalave City to cleanse the city from nightmares. Darkrai emerges and Brock believes because of the machine Team Rocket made it was lured here. Cresselia battles with Darkrai and uses its light, causing Darkrai to retreat. Cresselia disappears, as its task is done. 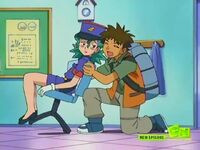 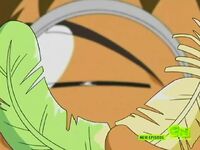 Brock notices the feather is fake 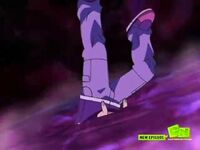 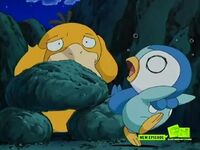 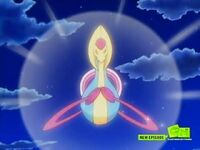 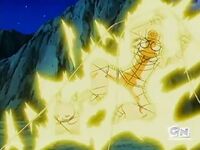 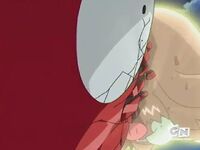 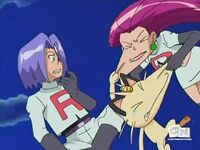 Jessie and Meowth pinch each other 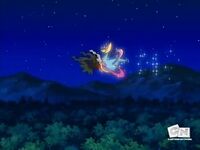 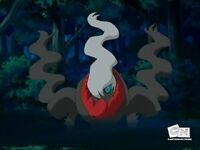 Darkrai retreats
Add a photo to this gallery

Retrieved from "https://pokemon.fandom.com/wiki/DP104:_Sleepless_In_Pre-Battle!?oldid=1286156"
Community content is available under CC-BY-SA unless otherwise noted.