Chimchar ponders Ash's offer. Ash thinks it has a great potential to be a great Pokémon. Paul insults them, thinking they both are pathetic. Ash ignores him and offers Chimchar an opportunity. Chimchar goes to accept the offer, but they get attacked by Team Rocket. Chimchar has been captured already. Team Rocket has already planed through to use Chimchar to get the Soothe Bell. Cacnea uses Pin Missile and Carnivine Bullet Seed on them. Ash promises Chimchar to get it out. Chimchar is relieved, but becomes angry and burns the balloon with Flamethrower.

Ash runs and gets Chimchar before it falls down. Ash asks Chimchar if it wants to come with them. Chimchar agrees and lets itself be captured. Later, Ash contacts Prof. Oak that he has a new partner. Oak is confident Ash will win the Tag battle tournament, even if Ash and Paul do not cooperate as they should. Dawn is happy to know Oak recited a poem, even if it was not meant to be a poem. Next day, the quarter-finals begin. Brock and Holly face Ash and Paul. Ash tells Chimchar to watch the battle. Holly advises to Brock he should not hold back, even if Ash is his friend. Brock knows he shouldn't - after all, he was a Gym Leader. Team Rocket, Conway and Dawn watch the battle.

Ash sends Staravia and Paul his Torterra, Brock his Croagunk and Holly her Farfetch'd. Staravia begins by using Aerial Ace, while Croagunk Poison Jab. Farfetch'd uses Air Slash, but gets countered by Torterra's Hyper Beam. This stopped Staravia and hit it, but defeated Farfetch'd. Ash is angry Paul hit Staravia, though Paul responds Staravia was too slow. Holly apologized to Brock, but Brock tells her it all right and promises to turn the events, so Croagunk uses Brick Break. Staravia charges with Aerial Ace, but stops (almost hitting Torterra), as Croagunk came under Torterra, then attacks Torterra. Croagunk goes to use Poison Jab. Ash orders Staravia to attack, but Paul stops him. With a Leaf Storm, Croagunk is defeated. Ash and Paul win the battle. Holly blames herself for the defeat, but Brock reminds her there are wins and losses. Ash praises Staravia, though Paul asks them what did they do in the battle, giving Chimchar a cold look.

At the Pokémon center, Brock is shocked to hear Holly left. Holly told Joy because of the defeat, she went to work and train to be stronger. Brock is sad, so orders Ash to get there and win. Joy gives Paul his Torterra and he thanks her, then sees Ash. The moment they saw each other takes some seconds, then Paul leaves. Dawn and Conway defeated the trainers and face Paul and Ash. Team Rocket is still dazzled by the Soothe Bell. Ash sends Chimchar and Paul his Elekid. Chimchar hesitates, but Ash tells it he is its trainer. Dawn sends Buizel and Conway sends Heracross. Chimchar begins by using Flamethrower on Heracross and Elekid uses Thunder on Buizel. Buizel uses Aqua Jet, stopping Flamethrower and attacks Chimchar. Elekid fires the Thunder at Buizel, but Heracross comes to stop Buizel from being hit, as it uses Revenge, then retaliates on Elekid, causing major damage on Elekid.

Ash tells Paul if they do not cooperate, they will lose. Paul responds what if they do, though Ash does not want to lose and orders Chimchar to dig. Buizel uses Aqua Jet and Elekid Protect to stop the attack. However, Buizel goes up and Heracross uses Feint (much to Paul's shock), negating Elekid's Protect, then throws Elekid away. Buizel uses Water Gun, hurting Elekid, but stops as it gets hit by Chimchar's dig, though Buizel counters with Aqua Jet. Chimchar uses Flamethrower, but gets countered by Buizel's Water Gun. Elekid uses ThunderPunch, but gets countered by Heracross' Megahorn. Elekid is badly damage, but evolves into Electabuzz. Electabuzz charges up to use Thunder, so Heracross uses Megahorn on Electabuzz and Buizel used Water Gun on Chimchar. However, Chimchar dodges and attacks Heracross with Flamethrower, while Electabuzz attacks Buizel with Thunder.

Both Heracross and Buizel bumped into each other by the force and caused a large explosion. After some time, the smoke clears and Buizel and Heracross still stand, although wounded. However, they fall down and are defeated. Because of this, Paul and Ash are victorious and win the tournament. Team Rocket are pleased with the victory, while Ash with his new Chimchar. Ash thanks Paul for the evolution, but Paul still thinks they are pathetic, as Chimchar could have defeated Heracross on the spot if it was not for Electabuzz. Ash ignores him, as he knows Chimchar is better than that. Enta gives them the Soothe Bells. The audience cheers for them, while Team Rocket go away, pleased by the result.

Later, Dawn and Brock congratulate Ash on the victory. Paul passes and throws to Ash his own Soothe Bell, saying he does not need it and goes away. Ash tells Chimchar that they are a team now and ignore Paul. Conway advises to Ash to head to Veilstone City and challenge the Gym leader. Brock reminds Ash that Paul is from Veilstone City, but Ash still wants to go to there. 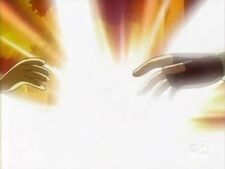 Ash and Chimchar are attacked 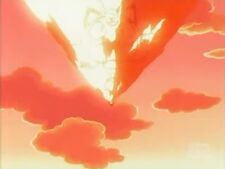 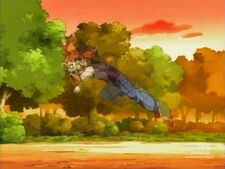 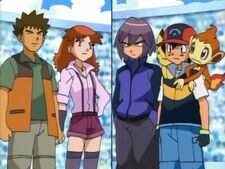 Brock and Holly vs. Paul and Ash 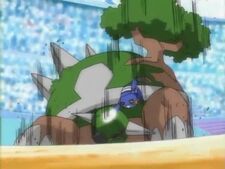 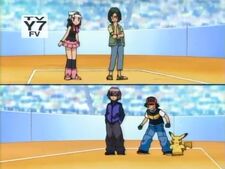 Dawn and Conway vs. Ash and Paul 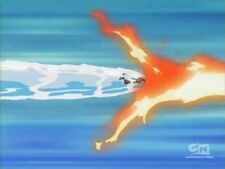 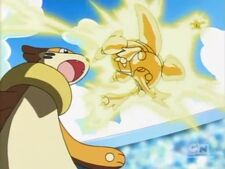 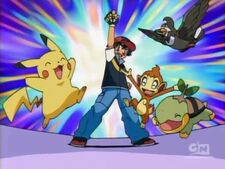 Ash gets the bell
Add a photo to this gallery
Retrieved from "https://pokemon.fandom.com/wiki/DP052:_Smells_Like_Team_Spirit!?oldid=1319887"
Community content is available under CC-BY-SA unless otherwise noted.