An Angry Combeenation! (琥珀の城のビークイン！ Vespiquen of the Amber Castle!) is the 32nd episode of Pokémon: Diamond & Pearl.

The heroes follow the Combee. Team Rocket are exhausted, except Meowth, who gives them confidence to continue. They do not move, however. The heroes continue, but lose Combee - even Mothim cannot continue. Meowth convinced James and Jessie to continue. They think they are walking towards a cliff end and they were, but turn around. However, the part of the cliff breaks and they fall down.

Mothim spotted something - a huge wall of Combee emerge. They follow it, hoping to reach the Amber Castle. They stop when they cannot find a route, although Pikachu and Mothim show the way - behind the waterfall. Team Rocket spied on them and sneak behind them. Passing through the waterfall the heroes find a secret tunnel. Since they are close, Pikachu smells the honey. They continue, but the tunnel becomes darker. They reach a crossway, but following Pikachu's voice, they find light at the end. They see a shiny portion of the cave and go walk on the path.

Pikachu and Mothim found a way, but Pikachu senses trouble and goes to get Mothim. The heroes go to find them, but reach a dead end. Team Rocket lost the twerps, but Meowth convinces them they do not need them - after all, Meowth can smell the honey, so they go to dig. The heroes wander and suddenly, Pikachu and Mothim arrive to them. However, they see Combee running away from something. Team Rocket also spots the angry Combee and the heroes see them as well. The heroes accuse Team Rocket of disturbing the Combee for digging. To prove them wrong, Jessie sends Seviper and James Cacnea.

Cacnea uses Pin Missile and Seviper Poison Tail on the Combee. The Combee retaliate with Psybeam, even attacking the heroes. Mothim uses Supersonic to confuse the Combee, as well as Seviper and Cacnea. Dawn sends Piplup, who uses Whirlpool to stop Team Rocket, for a while. The heroes run towards the deeper levels. They seem to reach a dead end, but Mothim seems to be excited. It is not a rock wall, but a Combee wall, who uses a Psybeam. With Mothim's Supersonic, the Combee wall falls and reveals a huge chamber.

The heroes enter and see honey everywhere - they reached Amber Castle. Cheryl spots a Vespiquen, but is very angry. Cheryl approaches it and she explains she wants a sample of the honey for her grandfather. Suddenly, Team Rocket arrive to get honey. Jessie sends Seviper, while James Cacnea and Carnivine. Seviper uses Poison Tail, while Cacnea Pin Missile and Carnivine Bullet Seed on Combee. The Combee use Psybeam to attack. This causes a crack and some of the honey is spoiled. Dawn sends Buneary, who uses Ice Beam to stop the cracking.

Since it is a temporarily solution, the heroes go to repair the walls. Brock sends Sudowoodo and Croagunk, who throw rocks to stop the cracking. Dawn sends Pachirisu to use Sweet Kiss to confuse Team Rocket's Pokémon. The heroes throw rocks to repair the wall and Team Rocket are ready to depart. Meowth opens an umbrella to stop the Psybeam attacks, though Vespiquen uses Power Gem to blast them off. The Combee take honey to repair the cracking. Vespiquen comes and gives Cheryl a pot of honey she asked for.

Everyone gets a taste of the honey and are amazed by the flavor, except Croagunk. The heroes go out of Amber Castle and Brock wants to go with Cheryl, promising to be a treasure hunter. Cheryl sees a Beedrill and recalls grandfather told her if she sees a Beedrill, she has to travel alone, so she leaves the heroes, including the heartbroken Brock. Meanwhile, Team Rocket run away from Pokémon, who want to lick the honey that was spoiled over them.

Similar to the error made in the previous episode with Gardenia's mantle, Jessie's undershirt is animated with skin color making it seem as if she has no undershirt. This happens just after Team Rocket crashed into the Amber Castle and is harder to spot when not played in slow motion. 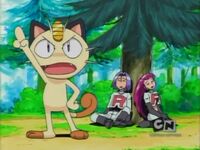 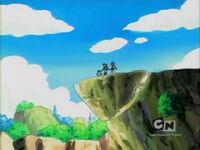 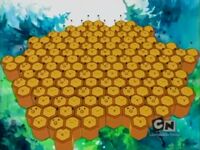 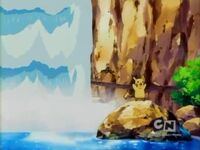 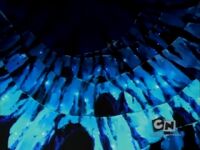 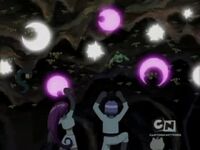 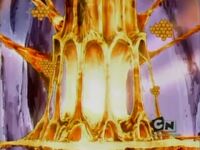 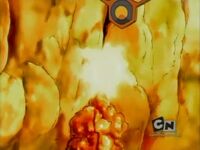 The honey repairs the wall 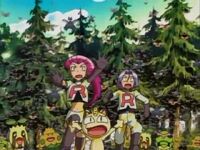 Team Rocket are chased
Add a photo to this gallery

Retrieved from "https://pokemon.fandom.com/wiki/DP032:_An_Angry_Combeenation!?oldid=1286090"
Community content is available under CC-BY-SA unless otherwise noted.