A new Trainer named Dawn turns 10 and begins her Pokémon journey, but ends up getting lost on the way to the lab to pick up her first Pokémon. Meanwhile, Ash takes a ship to the Sinnoh region, where a surprise attack from Team Rocket endangers Pikachu.

The episode begins early in the morning, with the sun shining brightly into the bedroom of a young girl who is just waking up on the verge of beginning her Pokémon Journey. She turns off her alarm and sits up in bed, only to fall back into bed again and hide in the sheets. She eventually gets up and pushes the window open to look out at her town. Today, she will get her first Pokémon.

Sometime later, the girl, named Dawn, is already half-way dressed when her mother, Johanna, appears. Dawn lets her in along with a Glameow. The two greet each other while Glameow quickly visits Dawn, then rests on the bed. Downstairs, mother and daughter discuss Dawn's plans over breakfast and Dawn pulls out a postcard that she receives from Professor Rowan, inviting her to his laboratory to pick up her first Pokémon. The postcard also contains a map to his lab, and pictures of the three Pokémon that she will be able to choose from. Johanna wonders what Pokémon her daughter will choose and Dawn looks over at the pictures of the three Pokémon: the Grass-type Turtwig, the Fire-type Chimchar, and the Water-type Piplup. Dawn then comments that regardless, all three Pokémon would make a great partner in her bid to become a Top Coordinator just like her mother. In her younger years, Johanna had earned many certificates and trophies, which inspires Dawn. She begins fantasizing about performing in Pokémon Contests with the three different Pokémon, acting out all her actions while her mother watches on.

Later, Dawn prepares to leave for her journey, lugging a suitcase behind her full of dresses and jewelry. Johanna, standing on the house porch, tells her to pack more sensibly. They go inside, where she fits everything that Dawn will need in a small backpack. Before she can leave on her journey, her mother gives her one last thing to take: her first Contest Ribbon. Dawn thanks her mom, gladly taking it and dashes over to her bike. Dawn then sets out towards Sandgem Town from her home in Twinleaf Town along Route 201. She arrives in a town, and runs into a building which she believes to be the Professor's lab, only to find that it is a restaurant. Even with a map as a guide, she gets lost in the town, following every possible direction but unable to find the lab. While reading her map, she bumps into a man who reveals himself to be Professor Rowan, who offers to guide her to his laboratory.

Meanwhile, at the lab, Professor Rowan's assistants are chatting while examining and feeding the three starter Pokémon. Two other assistants arrive in the room with a Starly and Staraptor. However, a fight quickly brews when Chimchar steals the last of Piplup's food. Piplup begins attacking Chimchar with Bubble Beam while Chimchar runs around the lab. While trying to keep Piplup under control, the chaos causes Starly and Staraptor to lose control, who begin flying around and wrecking books and papers. The Whirlwind breaks a window in the lab, allowing the two birds to fly through an open window, followed by Chimchar with Piplup in hot pursuit. The assistants plan to clean up, but as they begin, Professor Rowan arrives with Dawn.

With only the Turtwig remaining, after getting glared at by Rowan, continues to eat its food, Dawn asks and is allowed to go and search for the four missing Pokémon. After receiving some tips from Prof. Rowan, Dawn runs off towards the forest where the Pokémon were headed. Before she reaches the forest, however, she runs into Chimchar and Piplup, Chimchar still swinging away from Piplup's bubbles. Dawn attempts to calm them down, but they ignore her, Piplup changing his target to her briefly before both disappear into the forest. Dawn runs into the forest after them, only to hear Piplup's cry. She runs toward it, seeing Piplup as well as several other Pokémon trapped in a web created by an Ariados. The Ariados notices Dawn, chasing her through the forest. Dawn quickly hatches a plan, causing the Ariados to destroy its own web, making Piplup land safely in her arms. However, after sliding down a hill, Piplup seems very indignant, using Peck on Dawn several times. Dawn begins to berate him, but then realizes that he is simply hungry. Although Dawn offers him Pokémon food, he seems disdainful and won't eat it. This scene is interrupted when several Ariados return, attacking Dawn and Piplup with several of its friends.

Trapped in a cage created by String Shot, Dawn distracts the Ariados with the Pokémon food while Piplup destroys the cage with Bubble Beam. Unfortunately, before Dawn can escape with Piplup, an Ariados trips her with String Shot. Piplup steps in and uses Bide to absorb the attacks of the Ariados, then destroys them and the cage with a massive energy wave. Shortly after, the Piplup faints, exhausted from having taken all the attacks and the energy used.

While walking through the forest, Dawn stumbles upon Lake Verity. Piplup wakes up, recharged, but still hungry. Dawn looks into her Pokémon food can, noticing that she only has three pieces left. Despite being disdainful earlier, Piplup accepts the food. She then spots Staraptor carrying Chimchar back to the lab, with Starly close behind. Before they can return to the lab, however, the lake ripples, and a mysterious figure appears for a moment before vanishing. Upon returning to the lab, Dawn asks Professor Rowan about the figure. He notes that it could be the Legendary Pokémon of the lake. Shortly after, Rowan gives Dawn several Poké Balls and a Pokédex. Lastly, Rowan asks Dawn which Pokémon she wants for a starter. Much to Chimchar's obvious disdain, Dawn immediately chooses Piplup, noting that they are already a team. Dawn then sets out for her Pokémon journey in earnest, riding away from the lab, with Rowan and his assistants waving her off.

At the same time, Ash Ketchum , Pikachu, and Aipom are on a ship bound for Sinnoh. Ash boasts about becoming the Sinnoh Champion while Jessie, James, and Meowth watch from below decks. Later, Ash calls Professor Oak to let him know that Aipom has accompanied him to Sinnoh, and Oak muses that he suspected as much and will send Aipom's Poké Ball to Professor Rowan. Before they continue, though, Team Rocket quickly snatches Pikachu from their balloon. Before they can leave, Meowth begins to argue with Jessie, attacking Wobbuffet with Fury Swipes. Wobbuffet then uses Counter, destroying the balloon and sending Pikachu falling into the forest. The episode ends with Ash and Aipom running after Team Rocket, while Dawn cycles away from the lab. 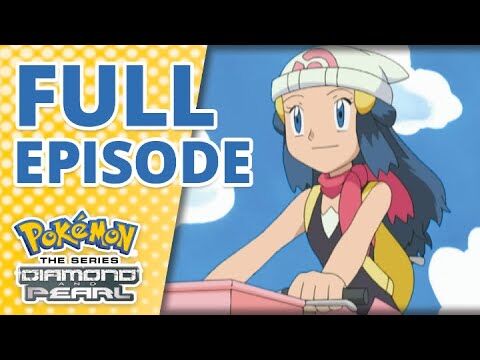