Pokémon Wiki
Register
Don't have an account?
Sign In
in: Pokémon manga characters, Female characters, Characters from Johto,
and 2 more

For the variant appearing in the games, see DJ Mary.

DJ Mary in HeartGold & SoulSilver arc, and in Crystal arc.

DJ Mary is a charismatic woman with curly pink hair. She usually wears a black bandana underneath her hair.

DJ Mary wears a dress with a zipper.

Later, DJ Mary wears a buttoned dress, dark stockings and fur boots. She also wears a choker. During her visit to Mahogany City's Gym, she also wears a pair of long gloves.

During the Gym Leaders' tournament, she switches her outfit with a vertical-striped short-sleeved shirt, as well as bright pants and shoes.

DJ Mary is a friendly person, who is Whitney's friend. Being employed in news business, she is also very observant of her surroundings, and makes commentary on Trainers' battles.

Joey explained to Gold he had to give the bag from Professor Oak to Professor Elm. This made Gold remember the radio show DJ Mary had with Oak. Gold decided to help Joey, who felt Gold was only in this to see DJ Mary.[1] Once they found Oak, Gold saw Oak's Pokédex and decided to focus on obtaining it than getting DJ Mary's autograph.[2]

DJ Mary held a radio show with Whitney, which Gold interrupred. Gold demanded to pack back the Smeargle that tricked him, even if it belonged to DJ Mary. The next day, Gold and Whitney had a race, in which DJ Mary was the host.[3] After the race ended, Mary gave an autograph for Gold.[4]

DJ Mary, along with the crew of the radio tower and Whitney, went to Mahogany Town to the Gym. They were quite displeased at the valley, where the Gym was located. Inside, after taking off their jackets, DJ Mary made a broadcast how she and the crew arrived to the Mahogany Gym, where the Pokémon Association director hoped to find Pryce, for it was believed that his Gym would be visited by Suicune. Just as they went onwards, the group was sliding on ice, so Whitney had her Mil Mil stop them by stomping on ice. After Pryce welcomed them in and went to make some tea, the group admired his ice sculptures. As Whitney was arguing with the radio director, DJ Mary pointed out the sculpture of Suicune started to move. Whitney started a battle against Suicune, which DJ Mary was watching.

The radio director decided to make a special broadcast, which made DJ Mary wonder how could he think of that when the battle was initiated.[5] She was glad Whitney was enjoying herself and, per her request, had Whitney borrow her Smeargle to draw an X on Suicune's face. As Whitney threw her Poké Ball, the Ball pierced through Suicune, which made Suicune cry she injured it. However, DJ Mary pointed out it was an ice sculpture and soon Pryce admitted he had his Pokémon fire icy attacks to create the sculpture and make it seem as it were moving. He explained he just wanted to train himself when Suicune would come to challenge it. Soon after, the group left the Gym, noting how skilled Pryce is and how he'll be able to catch Suicune.[6]

Along with the radio director, DJ Mary was at the Pokémon League, making a live broadcast.[7] She noted how the Gym Leaders arrived to the tournament via the linear motor car system. After explaining trainers can challenge the Gym Leaders for a badge, DJ Mary introduced them to the audience, stating the tournament would show their prowess.[8]

DJ Mary watched the battle and was surprised that Brock's Onix was taking damage from Jasmine's Steelix, even if Onix used Bind on the latter. She stated that was why Jasmine was called "Gal of ironwall guard".[9] She was also in shock that Janine surrendered the match to Falkner, even if she had an advantage.[10] Mary was interested how Morty's Misdreavus' Pain Split managed to heal the Pokémon and wound Lt. Surge's Magnemite at the same time.[11] Just as Mary was to declare Lt. Surge as the winner for having Magnemite defeat Misdreavus with Zap Cannon, an unexpected thing happened. Due to Misdreavus' Destiny Bond, Magnemite fainted, too, so Mary declared the battle a draw. She also noted how Sabrina unlucky was to battle against Bugsy, as Sabrina's Mr. Mime took a lot of damage from Bugsy's Scyther and Heracross's attacks.[12]

After Blue arrived to the stadium, DJ Mary explained Blue was to fight against his former master, Chuck, who taught Blue about fighting.[13] She continued watching the battle and was shocked that Blue chose to ride on Rhydon to battle against Chuck's Hitmontop.[14] Just as she was to declare the next battle, DJ Mary got an announcement that Blaine couldn't fight against Clair, so the captains, Erika and Pryce, had a match instead. She also noted how mysteriously Pryce's Swinub countered Erika's Skiploom's Petal Blizzard and easily defeated that Pokémon.[15]

Gold and Crystal managed to send a message to the audience from the screen about Team Rocket's plans, which shocked DJ Mary and the radio director. Soon after, Crystal and Gold met up with the director and DJ Mary, who reported that a train came and Team Rocket grunts emerged from it. They also reported that the Gym Leaders went to battle the grunts, but the train left the stadium.[16]

DJ Mary managed to arrive in time to stop a part of Masked Man's body from attacking the Gym Leaders, having her Smeargle use a fire attack on it. Whitney was surprised Smeargle knew a fire-type attack and was told it used Sketch to copy Entei's move.[17]

Mary was seen on one of the Seagallop ferries, sailing to the Battle Frontier.[20]

DJ Mary was with Hiro at the Pokéathlon Dome for their special show. She and Hiro announced the list of courses, and went to the Disc Catch course. However, Gold ran past by them, which made Mary a bit dizzy. He stopped and turned around, seeing his idol, DJ Mary, but Hiro recognized him as the troublemaker from New Bark Town. Gold felt underappreciated, since he did save the Johto region some time ago. Since he was wearing a jersey, the two noted Gold also participated, but wondered why was he running. Gold showed them an Aprijuice, for he had to put the Apricots into the container and run around to shake it, and to complete it. DJ Mary was worried as to why Gold wasn't at the stadium giving his Pokémon the orders. Gold showed that his Pokémon were perfectly capable of battling on their own, and even had his Togebo as his secret strategy for the courses.

DJ Mary looked at the Pokémon, and seeing its determination, she compared it to Gold as the twins, and giggled. DJ Mary went back to her post, where Hiro approached her, and he identified Gold's Pokémon, as well as their personalities. They continued observing Gold's success, until he entered the Speed Course, where he had to face Jet, the super athlete. They feared that Gold was not able to win, as Jet was always faster, and were disappointed to see Gold simply humming about and lazying around on his skateboard. However, they realized that Gold was actually memorizing the course, and was giving Togebo the orders where to run, and barely won the course. Mary applauded Gold for the victory, as he and Togebo were in perfect sync. Gold explained that was all because he was there when Togebo was hatched.[21]

The two were visited by Mr. Magnus, who founded the Pokáthlon Dome. He was touched to see such a determined athlete. Whitney came, too, and greeted DJ Mary, whom Whitney told she was competing, too, to watch over Gold. DJ Mary understood, and left the group as she had to continue her broadcast.[22] As a Dragonite appeared and started trashing the stadium, Hiro let DJ Mary evacuate herself.[23]

When Gold confronted Arceus, he remembered DJ Mary's talk, which inspired him to have Togebo fight the Legendary Pokémon.[24] 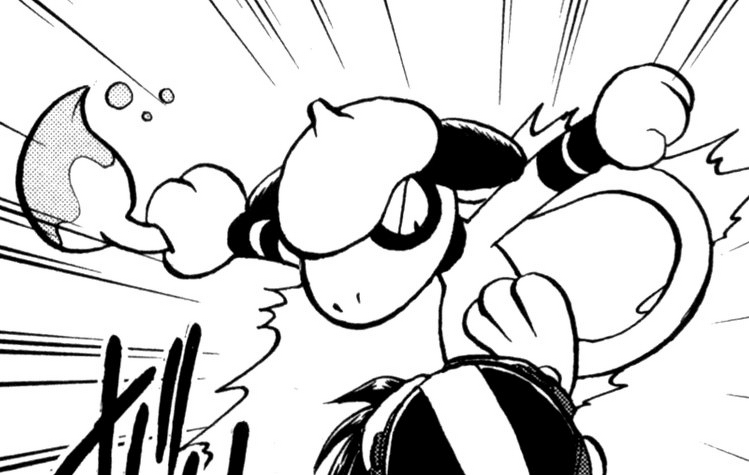