The trio, having encountered a Stunky, spends some time at a hot spring. Once over, they head to the top of Mt. Coronet, through a cave. As Diamond and Pearl fool around, a man sends his Pokémon to punish them for such bad behavior, and causes the entire place to cave-in.

The man sends a Pokémon out. A woman comes, apologizing to the man for waiting, as the south gate was keeping a parcel for him, and she passes it to the man. She gives the papers to the man to sign it, who comments signing something means that he is leaving a part of himself behind. Thus, he thinks it is fitting that he uses his favorite pen - a black quill from his Pokémon - to write his name out: Cyrus. At the waiting room, the trio sees nobody else dares to approach them, as they are still reeking from Stunky's smell. Diamond thinks it is sad they can't smell this scent. Pearl comments how unlucky they are, as Diamond is always involved in trouble: first the honey, than gas, and now this scent. A woman comes, disgusted by their smell, telling that they could go to the hot spring, and they even have some swimsuits for them to rent, all to prevent their guests from smelling this odor. Missy is glad, while Pearl notes they are asking them to wash off. Missy accepts, but also wants a back scrub and a massage.

The group goes to the hot spring, where Pearl is feeling relaxed, even if the scent won't come off as they hoped. Pearl thinks it is time they train their act, surprising Diamond, since they are bathing, and is told nobody is around, either. Pearl says things about held items, which the Pokémon can equip. Pearl thinks of Wide Lens, which increase accuracy. He hits Diamond with an object, who is taunting Pearl. Pearl also remembers stones, like Hard, Oval, Shiny or Dusk stones. Diamond adds Thunder, Rolling and Fire Stones, and gets hit by Pearl, who notes there's one entry that's not even an item. Pearl feels refreshed, and turns around to see Diamond, who is looking through the window. Pearl is amazed, as they are already close to Mt. Coronet; they only need to reach the top. Pearl is still under impression, as they are at the mountain that divides Sinnoh into eastern and western regions. He admits that he thought it'd take more time to reach the mountain, but it didn't take so long. Diamond points at the wild Pokémon, who are gathering, and think a mysterious force is drawing them out. Soon, the trio reunites, and are headed off to the mountain.

Cyrus walks with his Pokémon, after signing the papers. The original bodyguards, Paka and Uji, have come to the cycling road, as they predicted her client would have reached this place. The two continue cycling, and go to the northern gates. Meanwhile, Diamond, Pearl and missy go to Mt. Coronet's foothold. However, Pearl stops them, reminding that the signpost was pointing at the top, yet they have reached the inside of a cave. Diamond tells him this is the right way. In fact, the path through the caves should lead them towads the top. However, he admits this isn't the right cave, since they should take the path from the eastern part of the region. Pearl realizes Diamond read the guidebook, who confirms he did that this morning. Pearl shouts out that Diamond could've told this before. Missy shushes them, as their echo vibrates through the caves.

Cyrus, in the caves, is disappointed, as he hoped to experience the beginning of the world in here. He looks at Magneton and Nosepass, who are about to gain new forms, due to the mountain's mysterious energy. Those that spoil the moment would be destroyed; Nosepass and Magneton attack Diamond, Pearl and missy. Before the trio's very eyes, they see these two Pokémon evolving. Cyrus snaps his fingers, causing his two Pokémon to create an earthquake, which wounds the children. Cyrus looks at them, and feels this is their punishment for disturbing these sacred grounds. In fact, when Cyrus signed the papers, he announced he'd experience the beginning of the world. He explained that Mt. Coronet is the first mountain to appear in Sinnoh region, in a world that strife did not exist. He grabbed the woman by her arm, telling that battles endure one's heart, and is something they, as trainers, should never forget.

The woman speaks to the other woman, who approached Diamond, Pearl and missy, and is told that he was from "Universal Energy Research and Development Corporation". The woman remembers a commercial about them, as they promote distribution of energy to the masses. Cyrus contacts a person, explaining he has the parcel. He confirms his Pokémon have evolved, and permits the person to continue their plans, and permits them to raise their fundings, if needed to. In the cave, Diamond shouts Pearl and missy's names. He fears he got separated from the two, and they are under these rocks. Diamond slaps himself, realizing he is the only one who can help them. Thinking Pearl is the one to wake up first, he believes he has a better recovery rate. To that, he plans telling jokes to get his attention. He yells out to start the act, and hears a response from the rocks. Diamond yells out he thinks of distribution, and explains it's obvious where Pokémon like Beedrill or Combee live. He is asked why is that, and Diamond replies there's a lot of "buzz" about it.

However, Diamond hears no response, and goes to excavate the rocks. However, he encounters a large Pokémon, who jumps away. It crashes a boulder, showing there was a Shinx underneath it. The Pokémon comes to Diamond and gently zaps him. Diamond notices its claws, and realizes this was Luxio they encountered on Route 203, but it evolved. Diamond asks for its help, and the Pokémon illuminates a rock, where a person is trapped underneath it. Lax and Tru tackle the rock, showing Pearl and missy underneath it. Diamond is glad for the reunion, and shows Pearl that the Pokémon, Luxray, has been following them. Diamond also asks Luxray where is the nearest exit, and it points it is under a pile of rocks. However, Luxray wants to go to the western region, so Diamond permits it to do that. Diamond, Tru and Lax remove the pilke of rocks, which reveals some light. The group is glad, and they take this route.

Elsewhere, a pointy-haired man mutters money. Some men repeat this word, as the pointy-haired guy reminds that the boss has permitted him he'd do whatever he wants. He believes to get that money is to kidnap a rich man and extort them for cash. He finds a target: a daughter of a wealthy family, who is on a journey, far from home. While there are no photos of her, there are pictures of her bodyguards, Paka and Uji. He believes they will find the girl if they find these bodyguards, who are at the hot springs, washing each other. 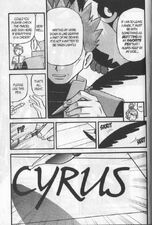 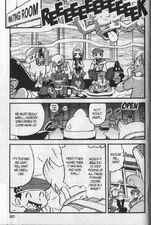 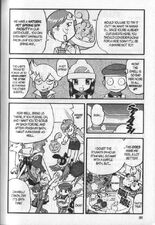 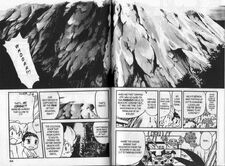 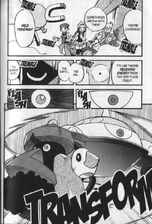 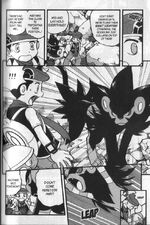 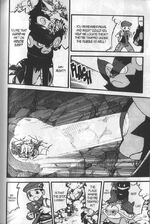 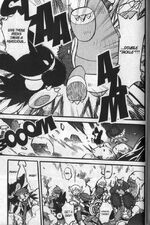 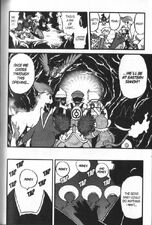 Add a photo to this gallery
Retrieved from "https://pokemon.fandom.com/wiki/D%26P012:_Passing_by_Probopass_and_Maneuvering_around_Magnezone?oldid=1285993"
Community content is available under CC-BY-SA unless otherwise noted.