Cyrus is a character appearing in Pokémon: The Johto Journeys.

Cyrus is Sonrisa's rival, winning many Sunflora contests in a row. He had a giant Sunflora breeded for the contest. In the end, Sonrisa won the contest, as her Sunflora defeated Team Rocket. 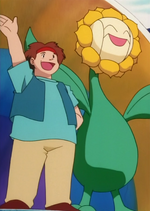