Cynthia is a powerful Pokémon Trainer and the Pokémon Champion of the Sinnoh region, where Professor Carolina, Cynthia's grandmother, runs the Pokémon Research Lab in Celestic Town.

Cynthia is a tall and slender young lady with gray eyes and wavy knee‐length creamy‐blonde hair that covers her left eye with bangs. Cynthia wears black straight‐leg trousers, a long black coat with a V‐neck and black fur rimming its cuffs and hem, and a teardrop‐shaped pearl on the center of the coat. Under the coat, she dons a black top. Cynthia's outfit is finished with black kitten‐heel pumps possessing each a yellow stripe. For accessories, Cynthia wears a black fur ruff around her neck with two pairs of hair clips on each side of her hair, both teardrop shaped and possessing each a yellow stripe.

Cynthia is a passionate Trainer who takes Pokémon very seriously. She is also seen to be a kind person who so deeply cares for both Pokémon and her friends that she helps out Trainers who look up to her and gives them tips on their journeys.

She is fond of ice cream and is almost always seen eating it. Outside of battle, Cynthia can be very airheaded and indecisive; she has even shown to have trouble deciding what type of ice cream to order.

Cynthia may originate from Cynthus, the mountain in which the Greek goddess Artemis was born.

In Diamond and Pearl, Cynthia appears occasionally to help the player character with various obstacles. She is also seen investigating various sites related to Legendary Pokémon out of curiosity. Her final appearance in the game is as the Champion.

Cynthia can be seen standing inside a log cabin in the Sinjoh Ruins, an event‐exclusive area that can be unlocked only by placing Arceus in front of the party and entering the Ruins Research Center in the Ruins of Alph.

In Black and White, Cynthia is battled—and can be rebattled—in Undella Town in the summer. In Pokémon Black 2 and Pokémon White 2, she can also be battled in spring. After losing, she will reveal that she was reminded of the Trainer who captured Giratina.

In Black 2 and White 2, she also makes an appearance in the Pokémon World Tournament in the Champion League.

Cynthia in Pokémon the Series (anime)

Cynthia's VS sprite in Generation IV.

"One look at you tells me many feats about you. Together, you and your Pokémon overcame all the challenges you faced, however difficult. It means that you've triumphed over any personal weaknesses, too. The power you learned… I can feel it emanating from you. That's enough talking. Let's get on with why you're here. I, Cynthia, accept your challenge as the Pokémon League Champion! There won't be any letup from me!"

"Have you been keeping well? Thank you for Mt. Coronet. I'm truly grateful. Together, you and your Pokémon overcame all the challenges you faced, however difficult. It means that you've triumphed over any personal weaknesses, too. The power you learned… I can feel it emanating from you. But that's enough talk. Let's get on with why you're here. As the Pokémon League Champion, I accept your challenge!"

During battle
"I won't let this end yet! This match is too fun to let it end this easily!"

After battle
"Just a few minutes ago, you were the most powerful challenger. And just now, you became the most powerful of all the Trainers. You are now our newest Champion!"
"That was excellent. Truly, an outstanding battle. You gave the support your Pokémon needed to maximize their power. And you guided them with certainty to secure victory. You have both passion and calculating coolness. Together, you and your Pokémon can overcome any challenge that may come your way. Those are the impressions I got from our battle. I'm glad I got to take part in the crowning of Sinnoh's new Champion!"

Before battle
"Before I send out my Pokémon, my heart always begins to race… Interesting… My Pokémon in their Poké Balls are radiating a happy feeling. Are you the reason? What are you?"

During battle
"When was the last time I was driven into a corner like this?" (Last Pokémon out)
"You haven't won yet! I won't let a fun battle end so easily!" (Last Pokémon, low in health)

After battle
"My heart is pounding so hard because I had such a heated battle with you. You are a truly great Trainer!!" 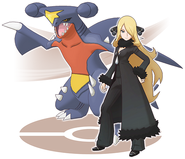