Cutiefly is a small, insectoid creature. For its size, it has fairly large and wide wings. Its face is varies in shades of yellow, following along with four black legs, with round feet.

Cutiefly is said to be able to sense moods of people, plants and other Pokémon. Cutiefly are also known to hover over Gossifleur, attempting to take their pollen.

Cutiefly can sense auras from livings things, including flowers, and can tell when they will bloom.

Cutiefly evolves into Ribombee at level 25.

Cutiefly is based on a Bombyliidae. It may also be a pun on the fairyfly species.

Cutiefly comes from cutie pie (a phrase used to refer to a cute person) and fly. 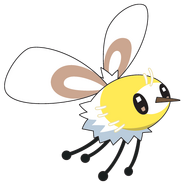 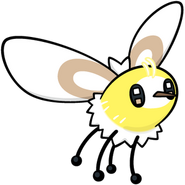 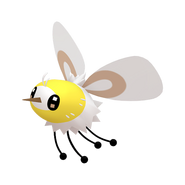