Cursola (サニゴーン Sanigoon) is a Ghost-type Pokémon introduced in Generation VIII and it is the evolved form of Corsola in its Galarian form.

Cursola is a Pokémon that looks like a dead coral. Its body is covered with coral branches and thorns, which is similar to those of Staghorn coral. Its top body is connected to the base, which has four limbs underneath and controls terrestrial movements. There are three holes in its face which resembles a ghost's face. Two small, semicircle-shaped at the top and an abstract shaped mouth where Cursola's face resides, having a white, spherical shape with red tired eyes and a small triangular-shaped mouth.

During a full moon night, Cursola will congregate in large groups and launch their branches skywards. Many people theorize that the main reason for this behavior is either releasing all of the ectoplasmic energy or as a way of communication. Although the truth behind such peculiar behavior of Cursola remains unknown, it is still an amazing sight to behold.

A Cursola can sometimes be seen happily floating around, which many assume that it is overjoyed to have become lighter in weight.

Cursola's seemingly lifeless shell is composed of ectoplasm that protects the core spirit inside Cursola. The ectoplasm covering Cursola's body can cause anyone who touches it to become as stiff as stone. It gained this shell by absorbing the spirit force of other creatures. As a result of containing too much energy from when it was Corsola, the energy burst out.

Cursola is based on bleached coral. Its petrification ability is likely based on the Greek mythology monster Gorgon, a horrifying woman-like creature with sharp-fanged vipers as hair that can turn their victims into stones. It also slightly resembles an animal skeleton, thus its Ghost type.

Cursola comes from "curse", "sole" (a piece of coral), "soul" and Corsola. 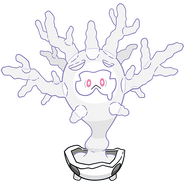 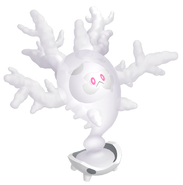