Cufant (ゾウドウ, Zoudou) is a steel-type introduced in Generation VIII.

Cufant resembles a baby elephant with a round, orange body and a light orange underbelly. It has dark green markings covering its head, legs, backside, and shovel-like trunk. In addition, it has a green bump on its head.

Cufant uses its shovel-like trunk to dig the ground. Its copper body tarnishes into a green color when under the rain, hence the markings.

It is strong enough to carry over five tons without worry.

It evolves into Copperajah at level 34.

The design for Cufant is based on an Indian elephant calf and copper. Its trunk seems to resemble some kind of holding or digging device, possibly a shovel. It may also be based on common depictions of elephants in Indian art. Significant to its Indian based origin design, copperware is known to be historically prominent in India as both a mallable and accessible material for craft goods, to help store food and water safely as its properties help kill off bacteria, and valued in medicinal ayurveda tradition. The Indian influence in its design despite being from the Britain-based Galar is due to British colonial influence in India. Its species, Copperderm, is a reference to the term pachyderm, an obsolete classification of mammals that included elephants, rhinoceroses, hippopotami, and tapirs. The term is still sometimes used today to refer to a mammal with thick skin, but it's used as merely a description of the animal rather than as a proper biological classification.

Cufant comes from the words cute, Cu (The periodic table symbol for copper) and elephant or infant. 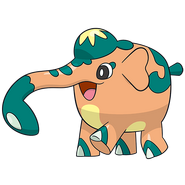 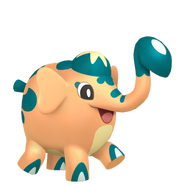